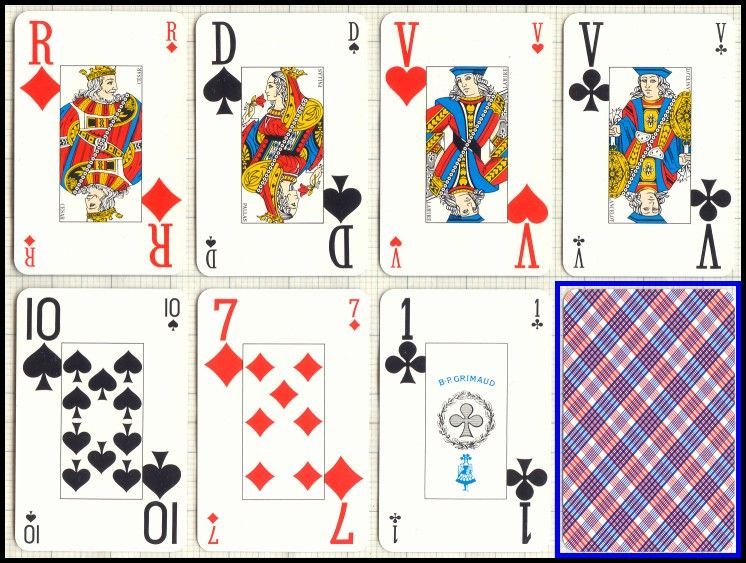 Belote is probably the most played game in France, essentially by adults (youngsters will probably play the "coinche" variant or Tarot during high school). It has been known for more than 75 years in France, and is played as a family game or as a money game (even if this last thing has been prohibited in bistros). A 32 card deck is needed ( that means a poker deck without cards 2 to 6 and jokers). Belote is a point-trick taking game for 4 players. Players are by teams of 2. Partners sit at opposite seats. The dealer gives everybody 3 cards face down, then 2. After that, the first card of the deck is turned faced up. Its suits will serve as trumps. Then, each player announces if he takes or not. If a polayer takes, he receives the face up card. Then the dealer deals 3 cards to everyone except the taker who receives only two. That makes for 8 cards for everyone. If no players takes, we take another round were each player announces if he takes, but also the suit that will serves as trumps (instead of the one of the face up card). After that, it is similar to Tarot: first player plays a card, then each player can play a card of the same suit or a trump. If you can't play the asked suit, you have to play a trump. If your partner wins the "pli", you don't have to play a trump. When 8 "plis" have been played (when no one has card in the hand), points are counted. The team with the most points win. Points values and order of the cards vary from other card games: Trump suit Point Value Other suits Point Value J 20 A 11 9 14 10 10 A 11 K 4 10 10 Q 3 K 4 J 2 Q 3 9 0 8 0 8 0 7 0 7 0 Variants: - la coinche (belote coinchée, belote bridgée) were everyone is dealt all the cards and player bids the number of points they're going to make. The biggest bid plays first. This has become the "standard" version in France these days. - la belote de comptoir: more rapid than belote, and involves heavy alcohol drinking for all players. - la belote découverte is a variant for 2 players, used essentially to teach the game to a new player. - Klabberjass (aka Klobyash) is the two-person variation played around the world.