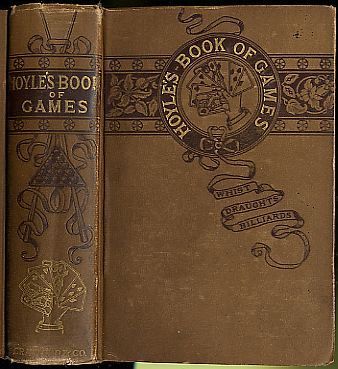 Originally created as a treatise on Whist published around 1742, later editions incorporated additional games. One source reports that it was the 8th edition which added sections on Quadrille, Piquet, and Backgammon; with the 11th edition adding Chess. At least 20 different versions of Hoyle's have been published over the years, making it the best-selling series of books about games in history and giving rise to the popular phrase, according to Hoyle. The title page of an edition published around 1900 reads as follows: "Hoyle's Games. America's Complete Hand-Book of Games, containing all the card games played in the United States, with their rules, regulations, technicalities, etc., adapted to the American mode of playing, from the text of Hoyle, and the best modern authorities. Also comprising Backgammon, Chess, Checkers, Billiards, Pool, Bagatelle, Bowls, etc., with numerous diagrams and engravings. Complete edition. Revised, corrected, and enlarged." One confusing aspect about this book is that there is no trademark on the name Hoyle (just like there is no trademark on the name Webster's for dictionaries), so referring to a book as Hoyle's Games could refer to a number of different volumes. The popular Hoyle's Games was first published in 1907, with at least ten editions published in the twentieth century. Each edition added to, edited, and clarified what had been presented in the earlier edition.