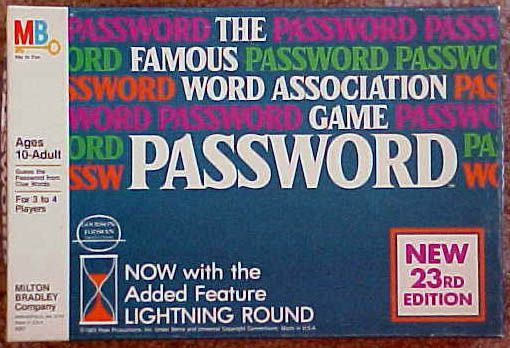 Based on the classic game show that began in 1961, with many editions printed starting in 1962. Each edition featured a different set of words, although later anniversary editions used words from previous sets. The object is for one person to get their teammate to say the password given a one-word clue for 10 points. Each time a clue is given, the other player can guess the password; if they get it right, the team scores. If they get it wrong, the other team gets to try for 9 points. This goes back and forth, with the word value continuing to decrease, until A) the word is guessed; B) ten clues are given without a correct guess; or C) the password is said by a clue-giver, in which case the word is thrown out. Hyphenated words (i.e., "lovey-dovey") are considered two words, and hence are inadmissible.