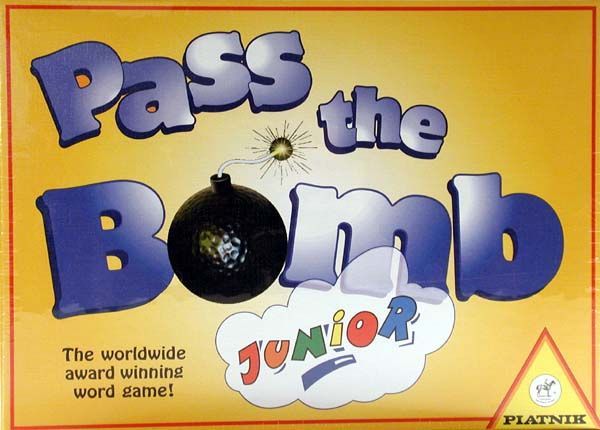 An association game. Draw a card with a word eg. a beach. name something on a beach an then it's the next players turn. You lose if you fail to come up with a word when the bomb explodes. Similar to its older sibling Pass the Bomb this version is for younger players. Children will easily recognize the familiar scenes on each card. In turn, each player has to think of an object that might be found in the picture on the card: for instance, if the scene is a beach, then perhaps 'sandcastle,' or ‘bucket,’ or even ‘whale’ might be good answers. What makes this game a fun challenge is a time bomb which is passed to each player on their turn. Be quick, because the bomb goes off at a random interval somewhere between 10 seconds and 1 minute. If you are holding the bomb when it 'explodes', you have to keep the card. The player with the least number of cards is the winner! Educational and great fun for kids. 2 or more players. Ages 5 and up CONTENTS: 55 Game Cards, Rules, Electronic Bomb (Batteries Included). NOTE: This Junior version is significantly different than the Regular version in that the Junior version does not have a randomizing die and it features picture cards rather than letter cards.