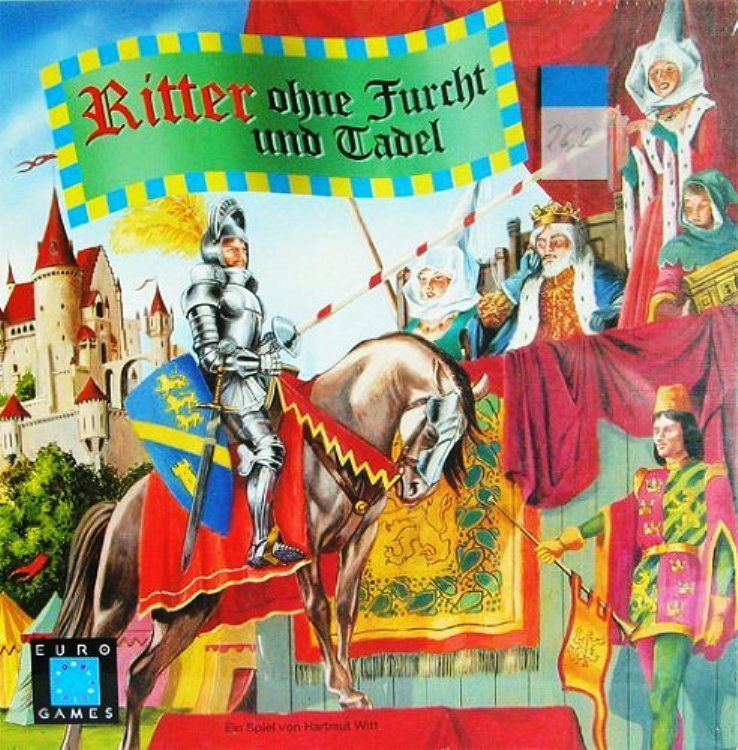 Depending upon the number of players, each player receives 1 or 2 knights. Each of these knights lists a series of dice pips on the card, some of which are red in color. These red numbers are the knights defensive abilities, and he will block these numbers if rolled by an opponent during a competition. For instance, Upollonius Wolkenburg has a 1, 2 and 3 in red. Thus, he will block one of each of these numbers each time dice are rolled by an opponent in a competition. Some knights have less numbers in red, but they usually have a greater attack strength, meaning they can roll more dice in combat. This mechanism borrows very heavily from many role playing and fantasy games. In addition to these 'defense' numbers and the attack dice chart, each knight card also has charts for prizes won (1 - 15) and damage points (1 - 10). There are also nice illustrations on each card ... about the only kind thing I can say about the game. Each player also receives a 'lady' card. Each lady possesses a number of characteristics, including hair color, build, height and personality. When granting her favor to a knight (which is indicated by placing a corresponding token onto a knight card), the idea is to seek out a knight who desires similar characteristics in a lady. The start player challenges an opposing knight with one of his knights. A challenge cannot be refused. These two enter battle, which involves each player tossing a number of dice equal to their attack strength into the tournament field. In mounted combat, any 1's, 2's or 3's thrown strike a blow, unless these are blocked by the opponent. If any of these dice strike, the knight falls from his horse and the knight suffers hit points equal to the number of blows which were landed. If only one knight is struck and falls from his horse, the opponent wins and earns a prize for himself and for his lady. If both knights fall from their horse, then the match continues on foot. This involves more dice rolling, but 4's, 5's and 6's now strike. This continues until one knight concedes or reaches 10 damage points, at which time he is out of the tournament (and out of the game). The next player in turn order then challenges a knight. This process is repeated until there is only one healthy knight remaining. The round then ends and victory points are doled out to the knight and lady who won the most prizes. There are also potential bonuses which add to the players' scores.