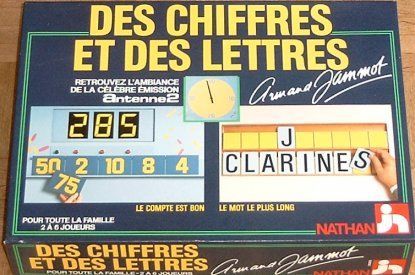 Based on a popular TV show in France. There are actually two games in this one. In these two games two players will try to accumulate the most points. The first game is a word game called Le mot le plus long. Both players randomly draw letter tiles asking for either a vowel or a consonant and then they both try to find the longest word using only those letters. The second game is a math game called Le compte est bon. Five tiles are randomly drawn. Each of these tiles have a number on it. Then a number between 100 and 999 is randomly generated and both players try to get as close as possible to this number using only the number tiles and the four basic operations. Second description from Paroliamo: An early 1980 game, published after quite some success of the game in TV shows in Italy on Telemontecarlo and, after, on Rai 2 (second Italian national channel). The game is similar to Scrabble and Boggle, the goal is to reach 50 points composing the longest word with the available letters represented by the cards. Every player, in turn, must choose 10 letters at random, stating, one after another, if he/she wants a vowel (red cards) or a consonant (blue cards). After the 10 cards are drawn, players have a fixed amount of time to compose the longest word with the 10 available letters.