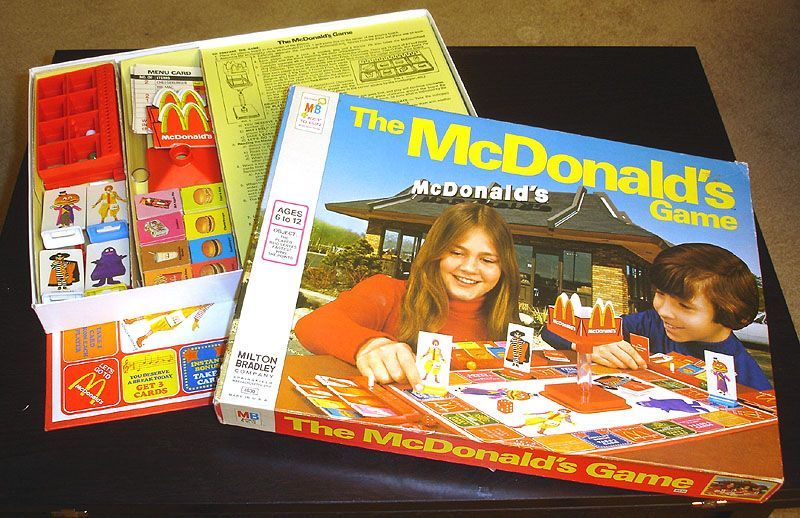 Players begin with trays filled with 8 food items (Big Mac, Hamburger, Cheeseburger, Filet O Fish, French Fries, Apple Pie, Cookies, and Chocolate Shakes) and are represented by one of 4 available McDonaldland characters (Ronald, Grimace, Hamburgular, Mayor McCheese). Players roll and move around the board collecting food items from the draw pile or other players. When a player lands on a “let’s go to McDonald’s” space, s/he draws a menu card and reads the order aloud. The other players have to fill the order as quickly as possible with the food items from their trays and toss colored marbles into the McDonald’s sign chute when they believe they are complete and correct. The winning player (the one with the first marble in) then verifies that the order is filled correctly and if it is then s/he collects points for it, and if not then the next player finished verifies his or her order for the points, and so on. The player reading the order collects the food ordered – if the order cannot be filled correctly with any player’s available items, the order in cancelled and roll and move play continues. Players score 1 point per food item served, or excess (any more than three) food item from their own tray returned to the draw pile before they roll to move for their turn - but they do not score any if they forget and roll first, but they still have to return excess items. First player to 25 points wins the game.