The Flowers of the Forest - Universal Statistics 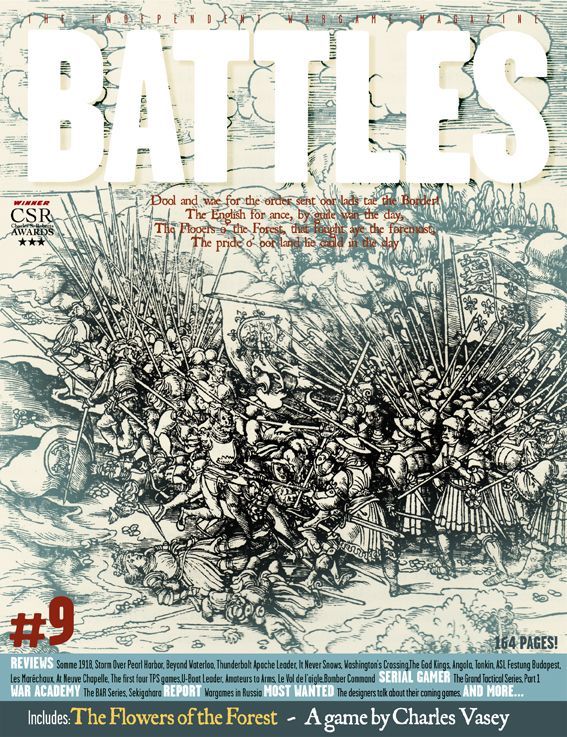 A simulation of the battle of Flodden, 1513. Re-published in Battles magazine #9. (from the designer:) The Flowers of The Forest covers the Anglo-Scots battle of Flodden in which an invading Scots army under the charismatic James IV was destroyed in hand-to-hand combat by the Earl of Surrey’s force. This was a clash between numbers of weapon-systems. The English had mostly bill and bow, though their light cavalry (the moss troopers) used a small crossbow called a latch. The Scots had changed over to the pike and were well supplied with cannon. I have assumed the Highland formations were not pike armed but used the more traditional sword and axe. The battle was one of the last with a medieval format of a small number of large “battles” – six a side at Flodden. These units manoeuvre on a map of the area around Flodden hill from which the Scots descended. The counters representing the bands of men are stored on Arrays which are displays that resemble a plan view of the unit counter. You will typically put the best bands at the front, and will also consider whether to put bows in the front line or in the rear. The combat system models the degradation of combat effectiveness as losses and morale reductions take a toll. However, just because the less experienced men at the back of the unit are unhappy does not mean that the unit will break. The key individual captains and “Big Men” of the front-line units must be defeated. When a unit snaps the entire unit will rout. The order system models the difficulty of controlling large bodies without radios. It also addresses the great independence (in practice) of Scots nobles over their Sassenach equivalents. The game is not balanced but plays quickly so that each player may have a turn at each side.