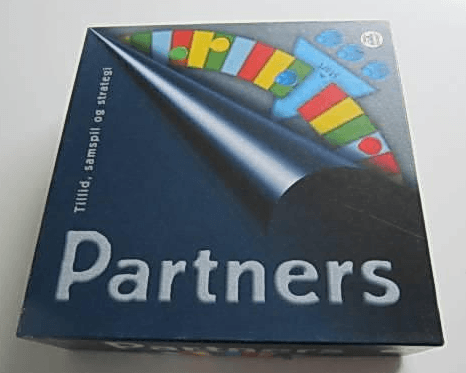 Partners has similarities to the Pachisi / Sorry! family of games, but with a few noticeable twists. The object of the game is to move own men from home to the target area as fast as possible. They are moved in a clockwise direction along the course according to the value of the cards. The winning player or team is the one who has first placed all its 8 men in the target area. The first twist is that play is based on a hand of four cards held by each player. Card values range from 1-14, with a number of special actions represented. The second twist is that it is a partnership game, with the players winning or losing as a team, which adds a significant level of strategy and tactics to the game. Partners trade one card at the beginning of each round, and once one player from a partnership has completed his or her group, his or her plays now assist his or her partner. Shares many similarities with Dog, and can be described as a simplified version of Dog.