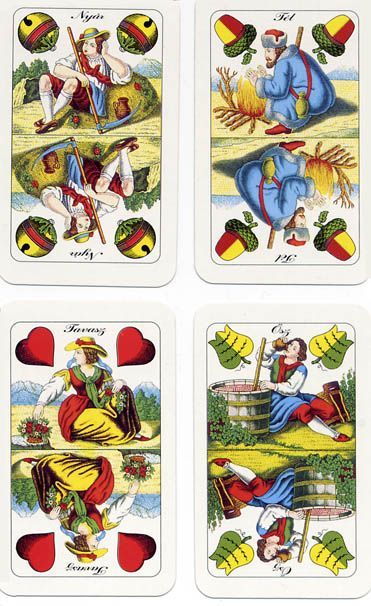 Ulti is the national card game of Hungary. Background to the Game It was developed in the 20th century from the rules of the 18th century card game Marias and the 19th century card game Talonmarias. It is traditionally played with a special deck of cards called the William Tell deck. The deck has 32 cards - like a modern Skat deck - but uses German suits (Bells, Hearts, Leaves, Acorns). The Game Ulti is a trick-taking game for three players. In each hand the player who wins the bidding chooses trumps (or no trumps) and plays alone against the other two players in partnership. Each player is dealt 10 cards. The start player is allowed to look at and swap with the two cards left over (called a Talon). Once they have done this they must make a bid. Each player in turn can choose to look at the Talon and swap cards with it but if they do they must make a bid which is of higher value than the previous one. Numerous different value bids can be made. These range from winning the hand, taking the last trick with the seven of the trump suit (Ulti), loosing every trick (Betli) or winning every trick (Durchmars). The value of most of these bids can be doubled by playing the Heart suit as the trump card. If a player thinks the winning bid will not be successful he can make a bid saying this when he plays the first trick (called a Kontra). At the end of the hand, if he is correct he will get double points (or money if playing for money.) Once the bid has been finalized the players play out the tricks. When the tricks have been finished the players see if the bid was successful. If the bid was successful the losing players give the winner the value of the bid (points or money). If the bid was unsuccessful the loser gives the other two players the value of the bid. If a player has called a Kontra he gets double points. Ulti has no fixed end point and players can play as many hands as they have time for.