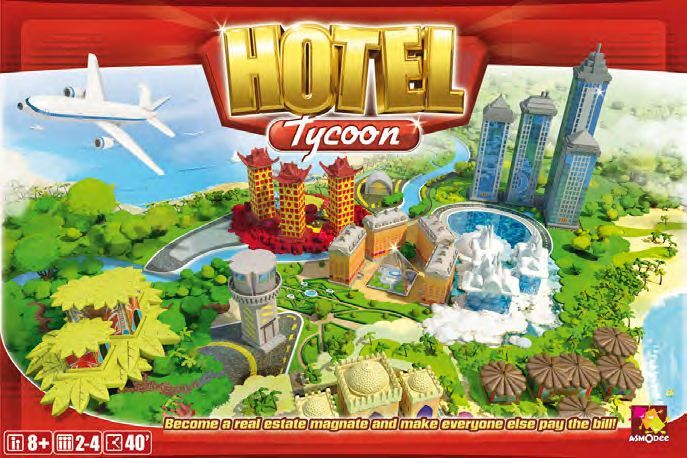 Hotel Tycoon, first published as Hotels, is a Monopoly-like game in which hotel tycoons try to buy and build the best hotels in the world and compete for guests. The game caters two to four players, ages eight and up. An average game lasts about 90 minutes. Players try to buy and build the best hotels in this game, earning the most money or bankrupting their opponents. A successful hotel consists of three components: the land on which it's built, the hotel buildings, and the entrances by which guests arrive in the hotels. All three components need to be bought separately with in-game money. As in Monopoly, money is earned by players who end up on one of the entrances of your hotels, after their dice roll. The more luxurious the hotel, the more money a guest will earn you. Money you can use to build extensions to your existing hotels, buying new entrances or pay other players when you arrive at their hotels. The game consists out of cardboard, three-dimensional hotel buildings, recreational grounds and entrance stairs that can be placed on the large game board.