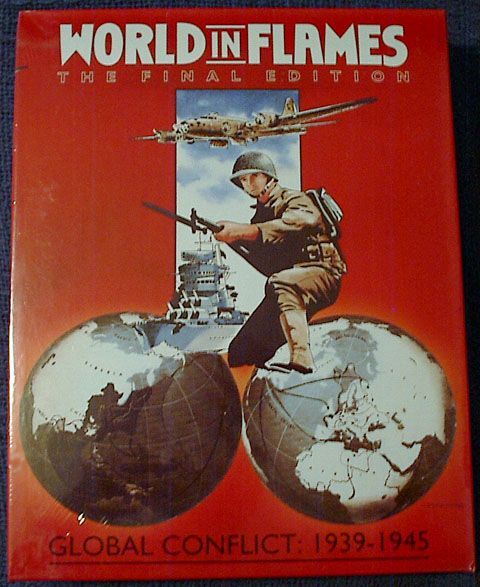 (from ADG website :) World in Flames is Australian Design group's international award winning game that is the strategic game of World War II. Five full-colour maps portray all the theatres of war: Europe, Russia, Africa, the Middle East, India, Asia, the Pacific, the Atlantic and (most importantly) Australia. [...]Counters represent the armies and corps, the aircraft carriers, the naval task forces and the air groups that took part. Everything you need to re-fight the greatest conflict in history. Two to six players make the strategic decisions that decide the fate of nations. What forces to produce, where to commit them, when and how? No two games of World in Flames play the same, no strategy is foolproof, any decision may have unforseen, long-term consequences. World in Flames contains all the latest top quality components, 1400 counters, 5 maps, 2 combat charts, one Production Circle and the comprehensive rules and scenarios booklets, that have been extensively updated and revised based on 2 million playing hours of the world's greatest game.