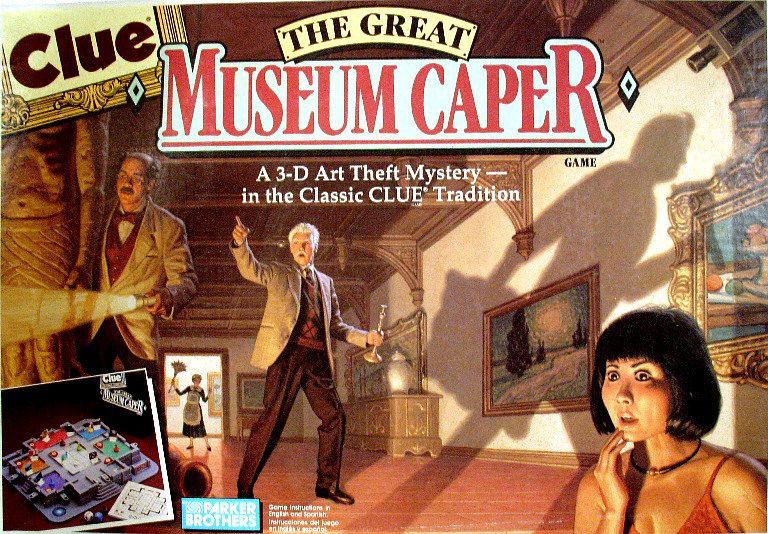 This is a semi-cooperative game which puts the "thief" against the rest of the players, who take the role of detectives. As the thief, you secretly plot your movements around a private art museum. As you go, the detectives take turns trying to find you with their eyes, the video cameras, or motion detectors. You can deactivate the cameras, and you can even cut off the power to the entire museum to mask your movements. Another advantage is that the thief gets a turn after every detective's individual turn. Another problem for the detectives is the fact that, once the thief has picked up a painting, she can take her next turn before removing the painting from the gameboard. The good guys know the vicinity, but won't know her exact location, as the thief is now up to 3 squares away from that spot. If a detective ever spots you with the naked eye, secret movement is over, and the thief's token is placed on the board for all to see. This can get frantic, since the thief can only move 1-3 spaces, while detectives roll a d6 for movement! The thief player has to decide when to attempt a getaway. The catch is, some of the windows and doors are locked. There are actual lock pieces, and you must flip over the one you are attempting to open (instant detective frenzy!). If she has stolen 3 paintings (in a one-off game), and manages to get out, she wins. In a tournament style game, each player gets a turn at being the thief, so the number of paintings needed will vary based on the other players' scores. 1991 Mensa Select Also selected by Family Fun Magazine as one of the best games. Original name by inventors was Heist. Clue name was added for marketing purposes when the game was licensed with Parker Brothers. Similar to Scotland Yard The Fury of Dracula Specter Ops