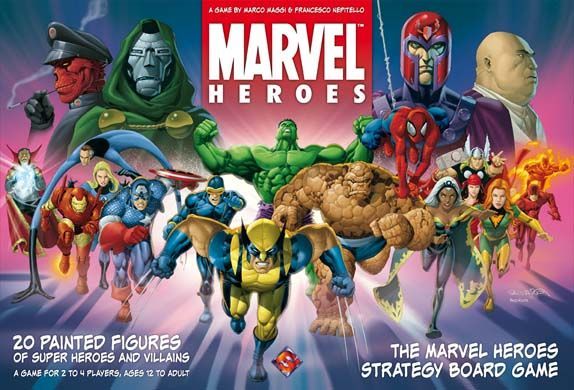 Marvel Heroes is a game set in the Marvel Universe for 2 to 4 players, with plenty of opportunities for cooperation and competition between the Super Heroes controlled by the players. Players take control of a group of Super Heroes (X-Men, Fantastic Four, Marvel Knights or the Avengers) as well as the Nemesis of one of the other player's group (Magneto, Dr. Doom, Kingpin or Red Skull). During the game, each player finds allies, enemies and power-ups, and face the menacing Super Villains controlled by the other players. High-quality plastic figures of many of the major Marvel Super Heroes, including Spider-Man, The Fantastic Four and The X-Men, as well as of the Nemesis characters, are included in the game. Each character featured in the game is represented by a detailed 40 mm plastic figure and an accompanying character card describing the character's special abilities. Power-ups can be added with special effects, which are different depending on who is acquiring these bonus items, so that all the different incarnations of the character can be played.