The Price of Freedom: The American Civil War 1861-1865 - Universal Statistics 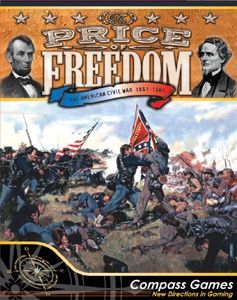 (from the designer:) The Price of Freedom: The American Civil War, 1861-65 is Renaud Verlaque's second published design after Age of Napoleon, winner of 2003 Best Pre-WW2 Historical Boardgame CSR award. The Price of Freedom is a true grand-strategic-level look at the American Civil War. Using an original card-driven system, it provides strong historical flavor in a simple game that can consistently be played in three hours. This makes The Price of Freedom an ideal game for today's gamer's busy lifestyle, as well as for tournaments. As you might expect from a quick-playing game, counter density in The Price of Freedom is purposefully low and is also constrained by each side’s War Effort level, an aggregate measure of economic, political and diplomatic support for the war. Each military game piece represents a "corps" of 20-30,000 men. Corps must organized into armies led by the colorful commanders that every American Civil War aficionado has come to love or hate. Twenty-five historical army commanders are available for theater or field command, from Ben "Spoons" Butler to "Massa" Robert E. Lee, with each commander rated -1, 0 or +1 for offense, defense and movement. Armies move and fight on a functional and yet very attractive point-to-point representation of the Eastern and Western theaters, vying to capture or defend critical territory or simply to beat each other out. The card-driven engine ensures that no game of The Price of Freedom is ever the same as another and that there are plenty of hard choices to make in each campaign impulse. The game uses a well-balanced deck of 55 cards that are all playable by both sides. Each card has two uses that are generally mutually exclusive: either it can be used by spending its operational value (ranging 1-3) on various actions (moving, reorganizing or reinforcing armies) or it can be used to implement the event described on the card. Events can affect army leadership (Commander-in-Chief, Clash of Egos, Shot from the Saddle) or battle resolution (Blundering Fool; Seeing the Elephant; Bickering Generals; etc.), help gain operational advantage (Strategic Transfer; Turning Movement; Interior Lines), or simulate major political, economic or diplomatic events (Draft; Kentucky; Blockade; etc.). Like overall army size, hand size is dictated by each side's War Effort level. The Union player can win by driving down the Confederate War Effort level low enough or by vastly outnumbering Confederate troops. The Confederate player can win in similar fashion or by hanging long and well enough to cause Lincoln to lose the 1864 elections or prevent the Union player from achieving the historical outcome. So convene your cabinet, call up your generals, muster your troops, it is time to fight and find out what is the true Price of Freedom! (from Compass Games website:)Components: 1 25"x19" cardstock map 132 counters 1 deck of 55 playing cards 2 player-aid cards 1 rules booklet 2 6-sided dice 1 full color box and lid