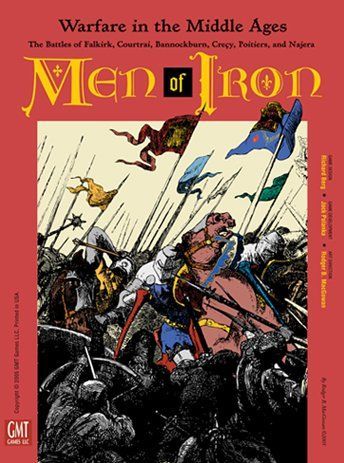 (from GMT website:) Men of Iron covers the re-emergence of infantry in the early 14th century, along with a more perceptive understanding of the value of combined-arms warfare especially with good use of defensive terrain. The scenarios highlight the key elements that made these battles so fascinating: the defensive power of the longbow, especially when used in coordination with dismounted, or even mounted, men-at-arms. Given the right deployments and forces, the inability to take advantage of the marvelous abilities of the vaunted knights, the finest mounted force in Europe, became something of a surprise to many "experts." Men of Iron is designed for quick learning and easy play. Game rules are short, there are no "turns" - play is Continual, with ample opportunities to steal play from your opponent - and combat resolution is a single dieroll. Playing time is about 1 hour per battle. Really! Men of Iron is also GMT's gift to the gamer who enjoys playing solitaire - the system is designed for both individual and face-to-face play without any loss in insight or Fun - to see what happened in these famous battles and why. The battles included in Men of Iron are: Falkirk - Scotland, 22 July 1298 - Wallace's great disaster, despite his massive schiltron. Good infantry is fine, but it needs support. The ultimate solitaire scenario. Courtrai - Flanders, 11 July 1302 - The Battle of the Golden Spurs The Flemish shock the elite French army with one the earliest displays of the power of solid infantry using defensive positions. Bannockburn - Scotland, 23-24 June 1314 - Robert the Bruce's famous triumph over a numerically superior but literally bogged down English army. Crecy - France, 26 August 1346 - The first great battle of the 100 Years War. It showed that infantry, supported by archers, could defeat the best knights in Europe. Poitiers - France, 19 September 1356 - The French fight dismounted this time and almost win. But the longbow, and solid English infantry prevail again. Najera - Castile, 3 April 1367 - The Black Prince goes to Spain with a marvelous combined arms force to further English plans of "expansion". The units feature longbows, crossbows, men-at-arms (mounted, dismounted, and unhorsed), hobilars, genitors, nasty Scots with axes, and even a couple of bombards! And the commanders! The great English King, Edward III and his son, The Black Prince, Wallace and The Bruce, Captal de Buch, and a host of kings. Each and every one a Man of Iron. Components: 3 counter sheets (700 total) Two 22x32 inch mapsheets (six game-maps) Battle Booklet 3 Play Aid Cards Rule Book Two ten-sided die DESIGNER Richard Berg DEVELOPER Jack Polonka MAP ART Knut Grunitz COUNTERS Rodger B. MacGowan, Mark Simonitch, & Mike Lemick