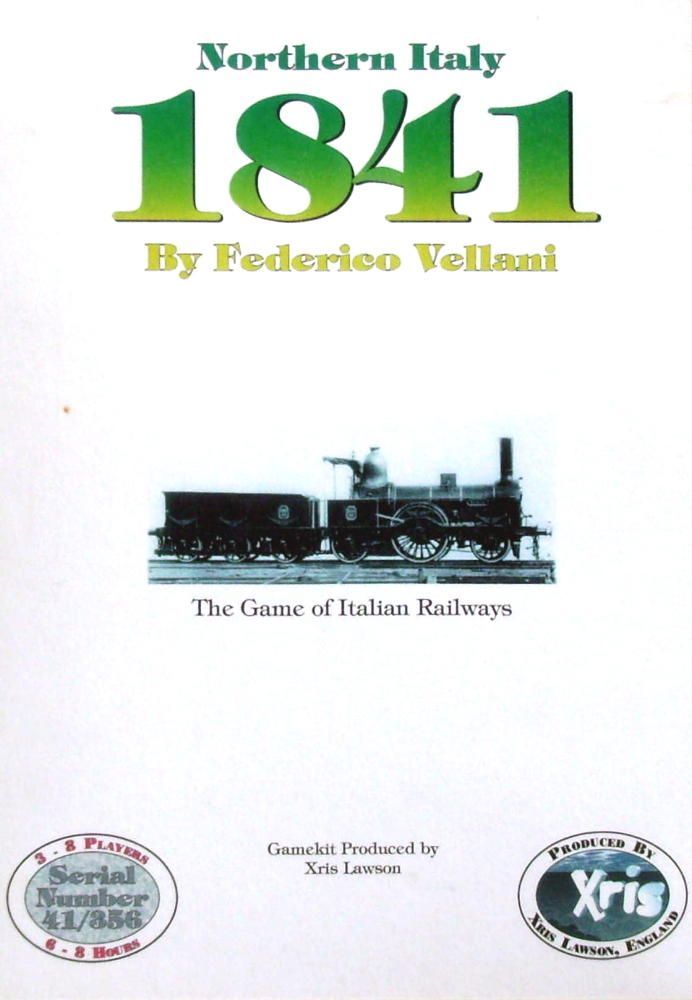 1841 is the apex (or nadir depending on your point of view) of 18xx stock-market manipulation. Set in Northern Italy during a period of rapid political change (borders for playable hexes change twice during the course of the game) the game is one of the most difficult even for experienced 18xx players. The greatest innovations center on the ability of companies to own shares in other public companies and the merging of companies. Train obsolescence is rapid and unforgiving, and it is quite possible for forced-purchase trains to be obsolete before they get a chance to run. Capitalization is on a per-share basis throughout the game and train prices are steep >1400 for an 8 train - the largest. There are 8 historical corporations and eight, named but ahistorical "generic" corporations. These are normally used simply as investment vehicles to maximize the amount of capital available to "successful" companies close to Milan. Northern Italy is mountainous, especially near the off-board Alpine areas and to the South of the map, making progress slow and expensive for the outlying historical companies. 1841 has a reputation as a very long game, but is not necessarily much longer than games, such as 1870, which have a very large bank. It can be completed in four hours. Chris Lawson's game kit is one version that is available and is of his usual high (for a game kit) quality. A large amount of time with scissors and craft knife to cut out the stock and tiles can be expected. Deep Thought Games now publishes 1841v2 which incorporates changes by Manlio Manzini to address some of the perceived shortcomings with the original which was designed by Federico Vellani with Manlio as a co-author. Description by Steve Thomas: 1841 is the 18xx game of choice for many players, though some hate it. Designed, and originally published as 1839 by Federico Vellani, it is set in northern Italy. The McGuffin here is that 1841 is the 18xx game which is least about actually building a railway and most about manipulating the stock market and managing the extremely fierce train obsolescence. Route development has its place, but unless the players can get the rest of the game about right they are doomed, and it is this which polarizes players' views of the game. When it first became available it whetted the slightly jaded palates of some players since the dividing line between success and abject failure is so narrow. 1841 achieves this by allowing companies to buy and sell shares in each other, and to merge with one another. These factors result in frequent and hard-to-predict changes to the order in which the companies operate. It's exciting and dynamic, and the only real downside, at least for "the financiers who've had enough of the engineers", to misquote the 1853 box art, is the length of the game. At typically seven hours it cannot sensibly be played in an evening. Even so, the game is usually well worth the investment of time, though it's certainly not for the novice.