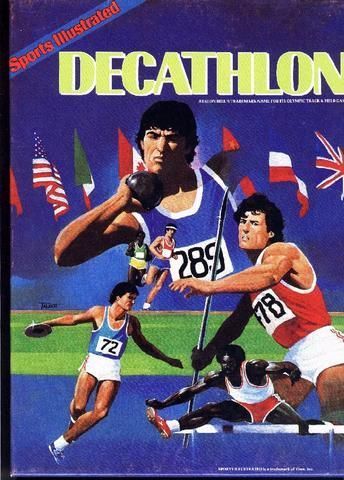 This Sports Illustrated game is a simulation of the Olympic Decathlon. You compete as one of 7 real medal winning decathletes: Jim Thorpe, Bob Matthias, Vasily Kuznetsov, Milt Campbell, Rafer Johnson, CK Yang, Bill Toomey. A fictional 8th player is a composite althete composed of the best performance of each event from these 7 athletes. Each event is simulated by rolling 3 special dice to generate a number which is used to read a result on a table for each althete. Some events allow a choice of trying an average attempt, a safe attempt, or going all out (which increase the risks of fouling or injuries). In events like the high jump and pole vault, the more attempts made the greater chance of fatigue. Injuries and fatigue affect the results of later events. Each event is converted to the standard scoring table for the decathlon. Also known as Track Meet.