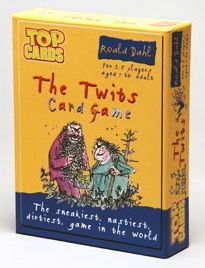 Based on characters created by Roald Dahl, this game is billed as... The sneakiest, nastiest, dirtiest game in the world! It is a simple card game, played over several rounds, in which players manage the cards in their hands in order to score as many points as possible each round. Some of the cards have positive values and some of the cards have negative values. There are also special cards marked 'upside down' that change the polarity of the cards in a players hand. On his or her turn a player takes the top card from the draw deck, banks one set of cards if possible, and then passes one card to the left. 'Upside down' cards may not be passed to another player. A set of three identical cards may be 'banked' during a players turn. When one player has banked three sets of cards the round ends and the players score their hands. All banked cards, whether plus or minus, score plus the face value of the set. For example three +10 cards score 10 points and three -6 cards score 6 points. Three 'upside down' cards may be banked for a score of 0. All the cards in each players' hand are then added together to determine how many points are scored. An 'Upside down' card in the players hand causes all + cards to become - and all - cards to become +. If the player has more than one upside down card they cancel each other out. Once the hands have been scored another round begins. The first player to reach 100 points is the winner.