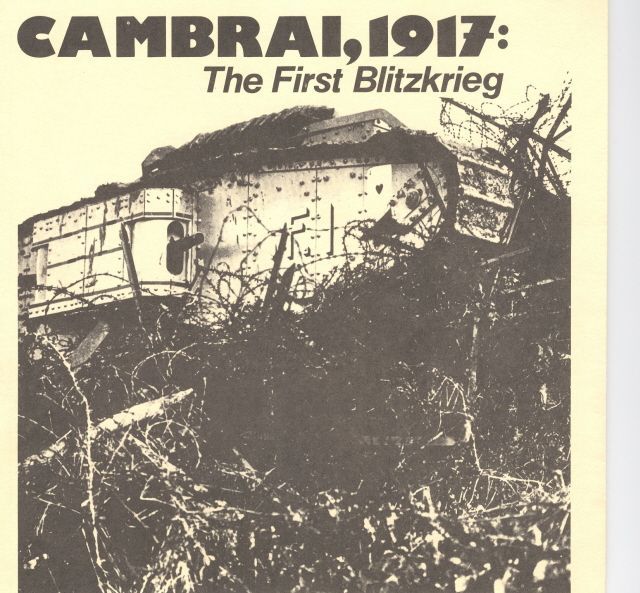 From the Rules Folder: CAMBRAI, 1917: The First Blitzkrieg In the pre-dawn darkness of 20 November, 1917, 378 British tanks and eleven divisions of infantry mounted the first truly mobile offensive in history, overrunning German positions with a rapidity comparable to the Blitzkriegs of the Second World War. Only a tenacious German defense-in-depth and an equally devastating counterattack employing the new, then-secret infiltration tactics, prevented the British from making a decisive breakthrough. Despite this setback, Cambrai was the forerunner of the mobile warfare of the Second World War. Now, THE FIRST BLITZKRIEG: CAMBRAI, 1917 allows you to recreate this battle, one of the most significant in military history. Two players, each taking on the role of one of the historical commanders, use the Mapboard, 72 unit counters, and complete rules of play, to either change or recreate the historical results." Description of Game Components: Game Consist of a two color map, 72 (3/4") counters and rules of play. No indication of scale is given in the rules. Map is 17 hexes from West to East and 16 hexes from North to South. Cambrai is located in north-east (upper right) corner of map and the town of Sorel-Le-Grand is located in the south-west (lower left) corner of map. Game is 17 turns in length. Rules are printed on both sides of single 18" x 16" sheet of paper. Rules include 13 "Variable Historical Options" that can be used singly or in combination to offer a "virtually limitless amount of scenarios." Each option changes a historical factor in the game and include: "British Develop Infiltration Tactics", "General Harper Fragged", "Improved Tanks", "Germans Forewarned", "French Participation", "Cavalryman's Fantasy" and "Free Setup." Hex Movement system, IGO-UGO sequence of play (with addition of tank attrition phase for British player. Combat Results Table is Odds Based and consists of a separate table for each type of attack (Standard, Mobile, Probing or Surprise). A 3-1 attack on the "Standard Attack" table results in a 33% (1,2) chance of a Defender Eliminated result, a 33% (3,4) chance of a "counterattack" result in which the defender has the chose of retreating 1 hex or counterattacking one of the hexes the attack was launched from, and a 33% (5,6) chance of a an Exchange result. From the Game Notes: "CAMBRAI, 1917 is a see-saw battle. The British have the advantage for the first three turns, but then it begins to slip away. The German commander than has the opportunity to stabilize the situation and seize the initiative with his counterattack. Therefore, the German should not give up if things look bad after the first few turns. The situation can change drastically every turn until the end of the game."