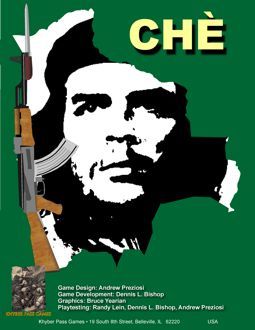 From the publisher, Area movement, simultaneous combat, NO CRT (though there will be plenty of die rolling), options for both true Offensive and Defensive combat for both players, chrome in the form of special units, rules and die roll modifiers and best of all, only two to four pages of rules so you can get into the game quickly. Once you learn the rules to one game, you will be able to play the other with just a quick run through of the combat rules. Comments: Its a fast and fun combat game where Che and his guerrillas try to destroy all Government Tactical Combat Groups. The swing in favor of the Bolivians comes in the middle of the game when the powerful Rangers come in to hunt Che down.