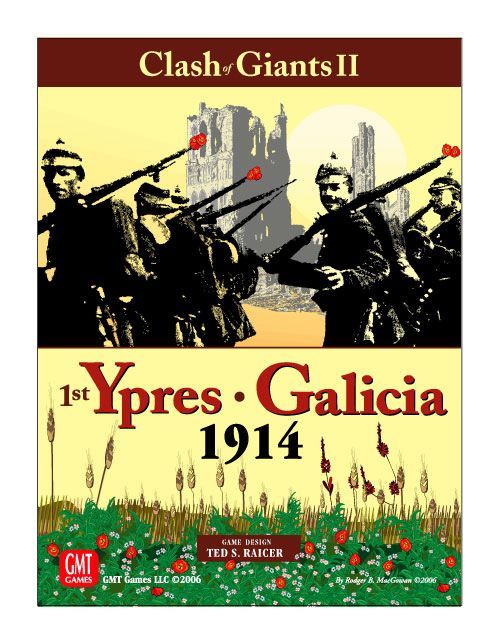 Clash of Giants II: The Campaigns of Galicia and First Ypres is a sequel to Clash of Giants which covered the campaigns of Tannenberg and the Marne. As with its predecessor, Clash of Giants II contains two separate games based on the same rules. The continues the series from Clash of Giants. Clash of Giants II: The Campaigns of Galicia and First Ypres, 1914 is the sequel to Ted Raicer's acclaimed Clash of Giants: Campaigns of Tannenberg and the Marne, 1914. As with the original design, CoG II contains two separate games (both using the same basic system) covering two of the most interesting (and least-gamed) campaigns of the First World War, Galicia and First Ypres . Galicia 1914 pitted the armies of Tsarist Russia and Habsburg Austria-Hungary in a ferocious struggle along a 200 mile front. The Austrian commander, General Conrad, refused to wait for the arrival of his 2nd Army, which had been initially deployed to the Serbian front, before going onto the offensive. The Austrian attack began on 19 August, with Conrad's 1st and 4th Armies on the Austrian left flank striking the Russian 4th and 5th Armies on the Tsarist right. The Austrians outnumbered the Russians on this flank, and initially drove them back, and Conrad began to dream of pocketing the entire Russian army group. But the absence of the Austrian 2nd Army gave the Russians an even greater numerical advantage on the opposite flank, as two Russian armies (the 3rd and 8th) struck the Austrian 3rd east of Lemberg (Lvov). Soon it was Conrad's armies that were in danger of being cut off and destroyed. The campaign was a catastrophe for Austria-Hungary, but in the end the result was a fatally incomplete victory for the Russians. The First Ypres game is the first game to cover the climax of the "Race to the Sea" on the Western Front that followed the inconclusive Allied victory at the Marne. By 8 October the continued outflanking attempts by both sides had nearly reached the English Channel. A massive meeting engagement developed, with the Germans first attempting to launch a massive cavalry raid around the Allied northern flank in the direction of Abbeville. When this fizzled (due to the timely arrival of a French infantry corps), the French and British began their own offensive aimed at driving all the way to the German border. But the Allied attack quickly ran into German troops of the 6th Army, hurried north from Alsace-Lorraine. Falkenhayn, the German commander, now planned to play his trump card, striking the BEF with four newly-raised reserve corps of hurriedly-trained but enthusiastic volunteers. In a month of brutal struggle in which the British lost 60,000 men, the Germans lost well over 100,000. Not realizing that the BEF had been bled white and was on the point of breaking, Falkenhayn called off his attacks in mid-November. The attempts to end the war by Christmas were over.