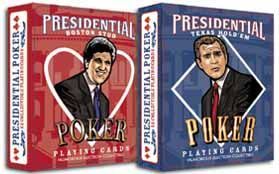 A wild Hold'em variation played with a richly illustrated deck of comic cards containing humorous images of the personalities and issues that contested the 2004 presidential election. Each card contains a unique "Swing Vote" that introduces a new rule to the current poker hand and cleverly relates to the funny illustration, nickname, and political caption on the card. The card names and humor will remind game geeks and political wonks of cards and news events from their favorite boardgames and presidential campaigns. The "Hanging Chad" card, for example, allows the second best hand to win the pot, the "Patriot Act" forces every player to reveal one of their hidden cards, the "National Insecurity Adviser" randomly redistributes the hole cards, and the "FCC" card penalizes the next player to curse. Each suit represents a different political point of view and poker term: the Hearts are the Pro-Kerry Boston Studs, the Diamonds the pro-Bush Texas Hold’ems, the Clubs the Anti-Kerry Flip Floppers, and the Spades are the Anti-Bush Dummy Hands. Can used to play any standard playing card game and is intended to provide as much value for the comedic commentary and art as the game play. Fantastic contemporary illustrations produced by hip-hop artist Cojo and veteran political cartoonist R.J. Matson. Presidential Poker 2012 will be published mid-year 2012 with entirely new personality and issue cards and a more strategic rule set.