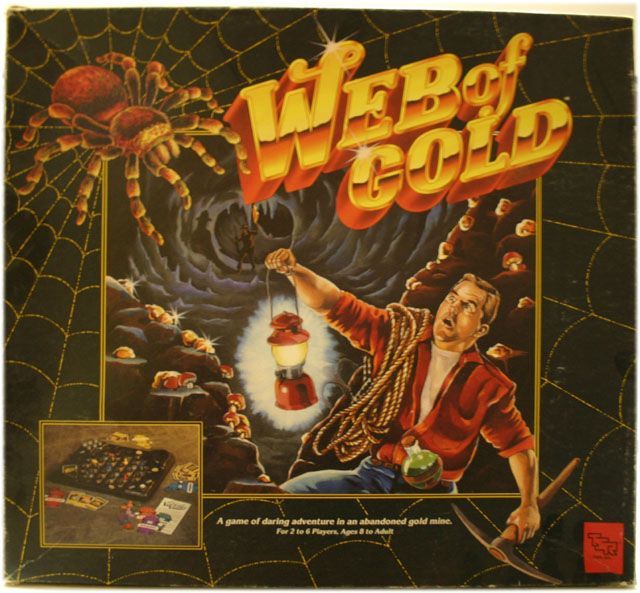 The players are adventurers seeking gold in an abandoned mine. Each ventures into the mine equipped with a lantern (with a limited amount of oil). The outer ring of hexes can be searched for additional equipment (torches, oil to refuel the lamp, mushrooms...) whilst the inner hexes are where the gold is to be found. First player to bring back six gold nuggets wins. Or,if all adventurers are killed, the player whose spider has scored the most kills wins... Finding gold isn't as easy as it seems; the richest hexes (smack in the mine's center, of course) only yield gold on a 4+ (on a d6); using the lantern gives a +1. Where it gets really fun is with the mine's other denizens: each player controls, in addition to his adventurer, a spider that hops from rock column to rock column (the pivot points where hexes meet; the board is 3D so this works really well) spinning webs --little cardboard barriers that slide into place between rock pillars. Adventurers "attack" the webs when they try to step through and could stay tangled (the adventurer pieces are slotted so they can be put on top of the web they're stuck in). Whilst thus caught, spiders can try to bite them --four bites and you're eliminated! The lantern is very useful in such a case as its light scares the spiders away. The spiders can co-operate to build stronger webs, and it isn't unusual for one spider to strengthen the web an adventurer is caught in so another spider has a better chance of biting him. All in all, a very enjoyable game. Works best with the full set of six players.