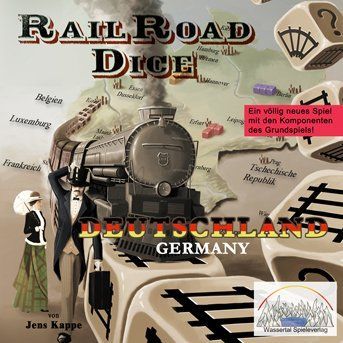 RailRoad Dice - Germany, is an expansion of Wassertal Spieleverlag's first game: RailRoad Dice - The First Rails. It is not your typical game expansion, but is a completely new game, with several new rules, and potentially new strategies. It is built on the firm foundation of the original game and should be a quick learn for experienced players. There are two main changes to the game: The map is now a 4 by 6 grid tiles representing Germany, and the Directorship, that is, who owns the track is determined by who transported the most players for a company, not who bought the most shares. Additionally, being Director means that you get 5 dice in income during your turn, and not 4 dice. These two changes alone should make for a very interesting game. It must be said that the game does not include any new dice. The standard set of dice in the original game has not been expanded. Some of the same rules apply: You only build or lay track on one or two tiles, as soon as you leave a tile, the track dice are removed and the station dice are left behind. New terrain features are rivers with special crossing rules for them, and that you can only build stations in specific locations indicated on the map. When you build a station at that location, you get the number of passengers for that station, 3,000 or 5,000, plus an additional 1,000 for every "share" symbol or question mark die you spend. This makes it easier for a player to get back into the game if they have fallen behind.