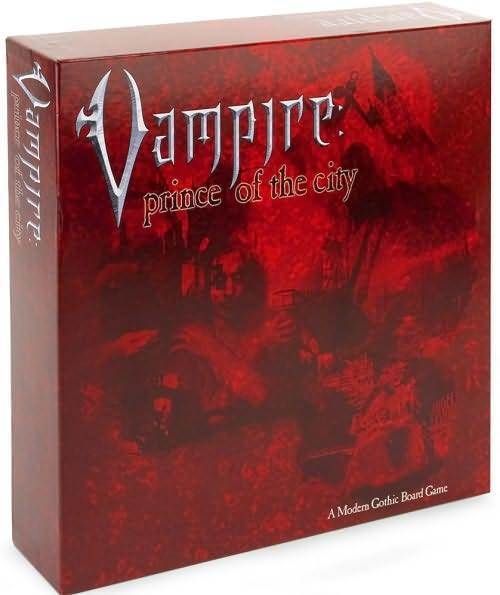 From the publisher: "Since time immemorial, the Kindred - vampires - have stalked unseen by the mortal masses upon whom they prey. Their world is ruled by the Prince, the most powerful and influential of the city's Kindred. The Prince's word is inviolate and his actions unquestionable. However, the Prince is dead and his legacy is but ashes. The mantle of leadership must fall upon another Kindred resident of the city ï¿½ one of the Primogen, the ruling council that normally supports and advises the Prince in his decisions and judgments. The competition will be fierce, and only the most cunning and resourceful Kindred will prevail. Deals will be struck, alliances will be forged, and agreements will be broken. Do you have what it takes to become the new Prince of the City? The aim of the game is simple: Score more Prestige than any other player so that you may be declared the new Prince. You gain Prestige by controlling areas of the board that are defined as realms of mortal Influence. Each category is further divided into zones, and some zones are more prestigious than others. Gain even more Prestige by resolving Events that affect the Kindred world, or by implementing various Strategies that give you a unique edge over your opponents. Most troublesome, Prestige can be lost as well as gained - if you are outmaneuvered, you may find yourself becoming Notorious. In the process of building your Prestige, you may acquire Resources or directly Challenge your opponents to hinder them or send them to torpor. You must also keep track of your Blood, which is used up as game turns go by and which you spend to activate Discipline powers. Influence, Resources, Strategy and Blood are the currencies of Kindred unlife, and thus they are all bargaining chips for you to use on the way to ultimate victory. Prince of the City is designed for three to five players, each of whom represents a different clan from Vampire: The Requiem. Of moderate complexity, the game calls for strategy, tactics, diplomacy and guile to succeed. A number of optional and advanced rules provide even more strategy and replay value for more experienced players. Created in the model of the finest European boardgames, the Prince of the City box contains everything you need to play the game, including a full-color board of artwork depicting the city, a rulebook describing how to play, one deck of playing cards (Events, Resources and Strategy), five 10-sided dice, five miniatures and a number of counters and tokens."