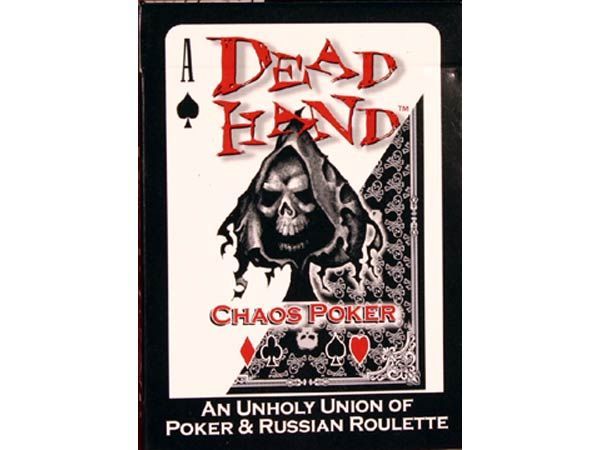 The Dead Hand Chaos Poker deck adds a twist on traditional poker. Play virtually any poker game you can think of (7-card stud, 5-card draw, etc). At the end of a hand, if there are still two or more players left for the showdown, the top card from the draw pile is turned face-up. 60% of the cards have a hidden message on the face of the card. By tipping the card back and forth in the light, a particular card or hand will be revealed in the varnish of the card. The named card or hand (if any) is dead and out of play. For instance, if the King of Spades is flipped up, the hand with the low spade is dead. If a seven is flipped, all Wild cards are dead. Even with its unique twist, Dead Hand is primarily a straight-forward game of Poker. The Dead Hand mechanic ends up only effecting approximately 20% of the hands played. So don't use the mechanic as a crutch, you've still got to play good poker. That said, you may find that the added element of chance keeps people in the game longer and folding a bit less than they might otherwise. A reference card is included, so you can watch which cards have been played and have a better idea of which hands are more likely to be killed by the Dead Hand.