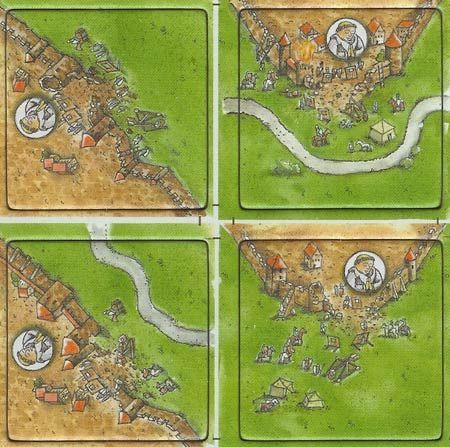 This is an 4 tile expansion for Carcassonne. The tiles allow you to lay siege on a city. A besieged city that is completed only yields 1 point per tile (2 if it includes a cathedral). Peasants supply the city as well as its besiegers, so every completed besieged city counts twice for them. Availability: The Siege tiles with the original art ('Die Katharer') are exclusive to German magazine Spielbox. They were included in issue 5/2004 (October/November) and the August 2005 'Der Carcassonne Almanach'. (Artist is Doris Matthäus.) The Siege has been re-released with new art by Rio Grande Games in October 2008 as part of the Mini Compilation Cult, Siege & Creativity. (Some have expressed concern with the new artwork as it is harder to see that a city is under siege.) A 6 tiles version of The Siege called 'Die Belagerer' (again with new art but similar to the Rio Grande edition) is part of the Carcassonne MÃ¼ller Exklusiv-Edition released in 2013 and sold by the German trade company Müller. It's also available now through Cundco. Part of the Carcassonne series.