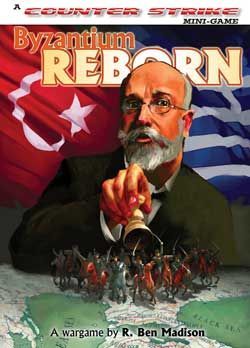 From the MicroDesign Group Website. THE GREAT IDEA World War I (1914-1918) left both Greece and Türkey near ruin. By 1920, Greece was emerging from what amounted to a civil war between supporters and opponents of the visionary but reckless prime minister, Elefthérios Venizélos. Türkey's civil war was still in progress, fought between the last, heartbroken Ottoman Sultan and the dynamic new insurgent, Mustapha Kemal (later called Atatürk). Each side in the wider struggle pursued its own vision of national rebirth. For Venizélos and Greece the dream was called "The Great Idea" and promised the renaissance of Greece as a great power through a restoration of the Byzantine Empire, the reconquest of Constantinople (lost to the Türks in 1453) and the reunion of all ethnic Greeks under the rule of Athens. For Kemal's Türks, their own "great idea" was the forging of a new, compact Türkish Republic united not by the outdated creed of Islam but by a new Türkish nationalism, modernized and empowered by Western culture and commerce. These two visions of national rebirth fought bitterly over the plains, deserts, and mountains of Anatolia for three long years. Western Anatolia was ethnically mixed, and neither side had an exclusive claim. The great prize was Smyrna, taken by Greece in 1919: a city which was home to more Greeks than Athens itself. The war had profound implications for the entire region. Greek victory would cement Greece as a regional power, and act as a beacon of hope to Orthodox Russians seeking to topple Lenin's Communists in the ongoing Russian Civil War. Türkish defeat would mean the collapse of Kemal's vision of a secular, democratic Türkey and would block the spread of Western values in the Near East, leaving Türkey battered and backward, and the rest of the Moslem world feeling victimized and enraged. As it happened, Türkey won and Greece lost. Kemal's vision prevailed; Türkey emerged victorious, united and profoundly westernized. Women gave up the veil and went to school. The Roman alphabet replaced the Arabic, and Islam was evicted from politics. For the Greeks, the end came in September of 1922 when the Türks captured Smyrna and burned the city to the ground. A million and a half Greeks fled or were expelled, and nearly 2,900 years of Hellenic civilization in Asia came to an abrupt and humiliating end. Greece, overwhelmed by refugees, collapsed into a series of coups and revolutions punctuated by all sorts of autocracy and spectacular misrule, from which, arguably, it has only recently recovered. Whose "great idea" will shape the modern Near East? Now you can make the decision by playing Byzantium Reborn! Byzantium Reborn is a simulation game on the Greek-Türkish War of 1920-22. The game is for two players, one representing the Kingdom of Greece and its allies (the Greek player), and the other the insurgent nationalist forces of Mustapha Kemal who opposed the Greek invasion (the Türkish player). The 11 x 17" map of Anatolia (Asia Minor) depicts the areas where the war took place. The scale is about 40 miles to the inch. The 280 counters represent the military formations including Turks, Greeks, French, Italians and many others.