Quest for the DragonLords: The Advanced Game Expansion - Universal Statistics 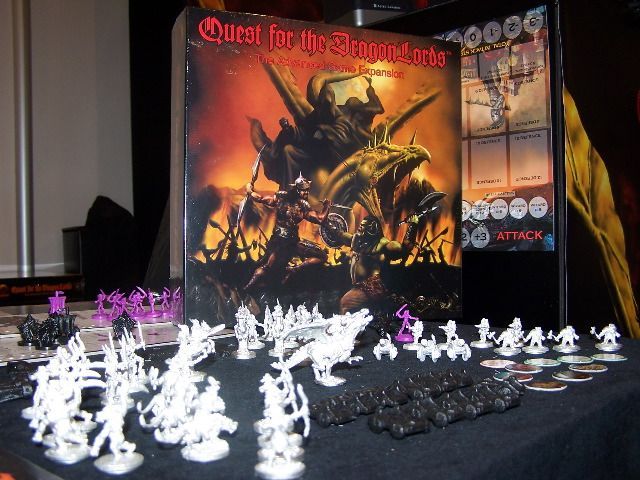 Quest for the DragonLords The Advanced Game Expansion All attempts at peace with our adversaries have failed. The evil ones have constructed great siege engines and our kingdom is under assault. Foul beasts pillage our realm from all sides. How much anguish can one people endure under such cruelty? Hope is all that we have left. The Crystal of Power must be re-forged to cleanse the land of the ills that have been bestowed upon her. One final push is needed to regain the shards of the Crystal of Power. We must re-build our realm, send forth our knights and ride into battle. Our war machine must grind our enemies to dust and take back what is rightfully ours. We must have faith that the Gods will grant us that power that eludes us from a lost age. A DragonLord, the most powerful force known. We must prevail on our Quest for the DragonLords! Quest for the DragonLords – The advanced game expansion provides a new level of intrigue. Each civilization has re-acquired the knowledge from the past and is able to build great weapons of war that includes fortifications and siege engines. As King or Queen of your realm, you may spend your hard earned resources on Calvary, archers, or heavy infantry. Each new unit is unique to its civilization. Orcs can ride wolves into battle and the Dwarf civilization use cannons to bombard their enemies just to name a few. Your imagination is the key to victory with this game of fantasy world conquest. The advanced game expansion includes the following highly detailed sculpted pewter miniatures (1:72 scale / 20 – 25mm): 4 Orc archers 4 Hobgoblins 3 Wolf riders 4 Elf archers 4 Elf knights 3 Elf mounted knights 4 Dwarf crossbowmen 4 Dwarf knights 3 Dwarf Cannon 4 Barbarian archers 4 Barbarian knights 3 Barbarian mounted knights 1 DragonLord (Appprox: 120mm long) The advanced game also includes: 1 set of plastic miniature catapults, fortifications and watchtowers. 2 sheets of sturdy cardboard counters Fully illustrated instruction booklet of the advanced rules of combat Expands: Quest for the Dragonlords