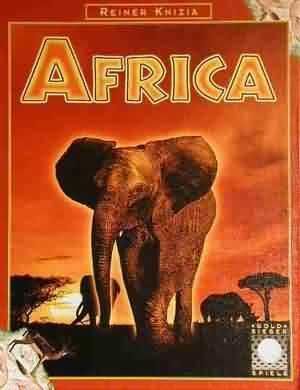 Players take on the role of Explorers in uncharted Africa. The circular playing counters are placed upside down in random locations upon the various circles of the board. Each turn the player may elect to move his explorer to a revealed location anywhere on the board, or move twice, each turn moving 0, 1 or 2 adjacent revealed spaces. The explorer may then take an action, such as reveal an unrevealed tile, or move various revealed tiles to other locations. Needless to say the theme is a bit of a veneer upon what is essentially an abstract game. The tiles represent trade goods (of various sets), nomads, herds of animals, gold/ diamonds, and monuments. When the 11th monument is revealed, the game ends. This being a Knizia game there are various methods of scoring the revealed tiles, including immediate points, delayed points, opportunity points and end points. The game components are well made in thick card, with some nice blue plastic pyramids(tents) and are likely to stand up to usage. The artwork is colorful without being garish, clearly presented and functional without being fussy. Each player also is provided with a very useful index card sized thick card reference sheet, which more or less encapsulates all the game rules upon it- a good idea which is to be commended to other designers. Awarded "Best Family Game" title by Games Magazine in 2002.