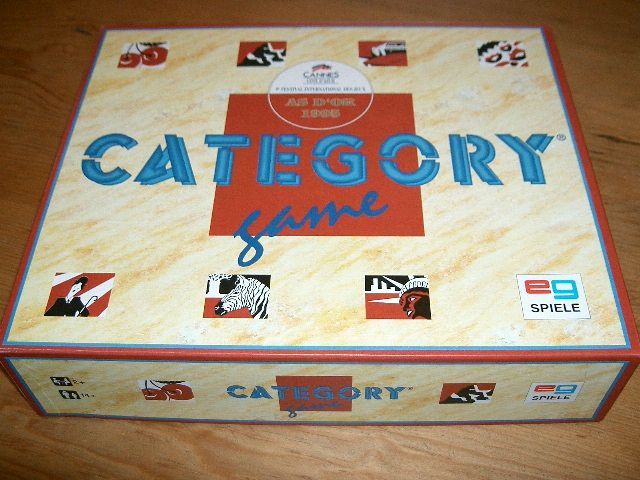 Category Game is a party game about finding words: a 5x5 plastic grid with 5 "word category" cards (placed over the columns) and 5 letter tiles (placed at the left border of the rows)is filled with 25 marbles (whose value is 1, 2 or 3 points). Any marble is placed in a cell in the grid, whose position is corresponding to a category column and a letter row: you can take the marble finding a word in the category of the column, beginning with the letter in the row. For instance, if the category is "Games", and letter is "C", you can also say... "Category Game"! Players are arranged in teams, then the starting player has 15 seconds to try to get as many marbles as he can, saying words matching the category on the column, and beginning with the letter on the row. The uncomplete grid is then passed to the next player, who has 15 seconds to take some of the remaining marbles, and so on. When the grid is empty, or when everyone passes (i.e. when you only have on the grid marbles corresponding to a difficult or impossible letter/category match), points are scored. Category cards and letter tiles are then changed, marbles are randomly put again on the grid, and a new round begins. Category Game is a very nice reworking of a traditional pencil and paper game: I appreciate the fast pace induced by the 15 seconds sandtimer, the partnership play, the good assortment of category cards, and... the arguing! In effect, some of the cards are an undoubtful source for arguments (or - when the going get tough - for "marbles wars"... be careful!): "Into the sea", for instance... What if someone says "Cars" or "Chairs"? Shouldn't cars or chairs get into the sea?