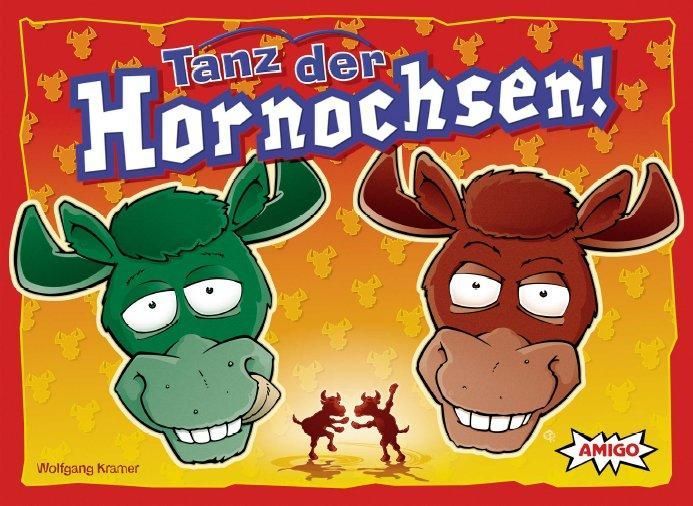 From the publisher, AMIGO: This is a boardgame version of the card game 6 nimmt! (more precisely, the version sold as 6 Nimmt!). To kick off the celebrations for the 10 year anniversary of the release of his 6 Nimmt! game, Wolfgang Kramer presents Tanz der Hornochsen, a crazy board game. It uses the base concept of the card game, but expands it and enriches it in many ways. So Tanz der Hornochsen is a completely separate gaming experience, one that pleases through both the clever game system as well as the wonderful illustrations by Oliver Freudenreich. Two to eight players try to place their cows (cardboard markers with number values) onto the meadow spaces such that they don't land on a bullhead space. The winner, at the end of the game, is the player who is the furthest away from becoming a bullhead. Tanz der Hornochsen lets even players who have no prior experience with the card game quickly get started with the bovine silliness. The bullheads await the dance! Play Summary Each round players will select a tile to play and place it face down in front of them. When everyone is ready, the tiles are revealed. Tiles are placed on the board in order, lowest to highest. Which row a tile is placed in is determined according to the following rules: 1. Increasing number value. The number on the tile to be placed must be higher than the number on the tile that is currently the last tile in that row. 2. Smallest difference. The tile must always be placed at the end of the row where there will be the smallest difference between it and the tile currently at that row. All four active rows must be examined to determine which has the smallest difference. 3. Lowest number. If the played tile's number is lower than that of the end tile on all four rows, it must be placed at the end of the row with the highest number. When a player places a tile on a cowpie, he scores that many points and moves his pawn that many spaces around the scoring track. If the Happy Cows are active, he gets to move his pawn back (away from the Dung Heap) that many spaces instead of forward (towards the Dung Heap). When a player places a tile on the Bullhead at the end of a row, that row is completed and the player must execute the following actions in order: 1. Score penalty points as shown on the Bullhead space by moving his pawn around the score track. 2. Move the just-played tile to the first space on the next unoccupied row. 3. Remove the remaining tiles from the completed row. Choose one or two to keep (behind his player screen). Place the remaining tiles back in the box or off to the side. They will not be used for the remainder of the game. Enhancements over 6 Nimmt! Tanz der Hornochsen includes many enhancements over the card game versions of 6 Nimmt!, including: Double Play spaces requiring players to play 2 tiles in a round, Happy Cow spaces that reverse scores while active, the two Bull's Eye spots on the scoring track that give the player closest to the Dung Heap an advantage for a round, and the ability of players to purchase new tiles each round prior to choosing a tile to play. All these enhancements increase the play dynamic considerably.