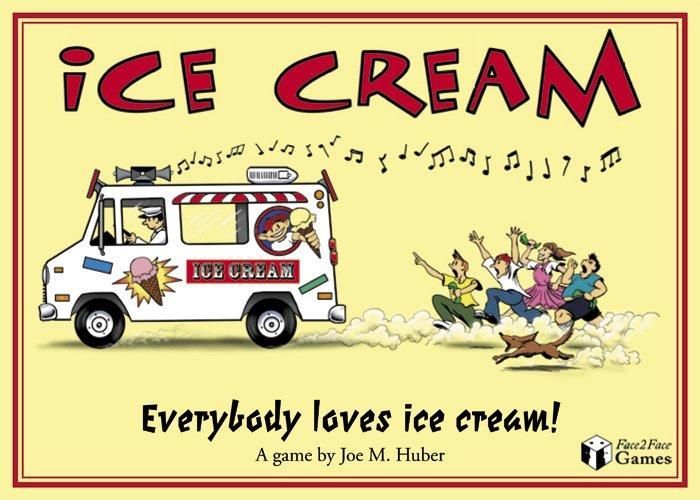 From the publisher, Face2Face Games: I Scream, You Scream, We All Scream for Ice Cream! Nothing says summertime like a trip to the local ice cream stand. In Ice Cream, you have the chance to demonstrate your business skills by running an ice cream stand. You have just four days to bring in as many customers as you can - will you be the prince of pistachio, the countess of chocolate... or just a drip? Start Scooping! Players receive a random ice cream card at the start of the game and every round. The ice cream card shows a carton of ice cream in one of six flavors. It can supply an unlimited amount of that flavor during a round. During the round, players take turns drawing an ice cream scoop card, placing it on an existing ice cream cone or starting a new cone. Once all the cones are made, players take turns serving cones, collecting the scoop cards from a cone that they can supply. They must be able to supply the flavors for all the scoop cards in the cone, except possibly the flavor for a single scoop card, which they would discard. If a player cannot serve a cone, they must draw another ice cream supply card instead. At the end of a round, a player receives a point for each scoop card collected, as well as for excess ice cream supply cards. All scoops and all ice cream cards used to supply scoops are shuffled back into the deck and a new round begins. Whoever has the most points after four rounds wins. This game includes rules in English, French, German, Swedish, Spanish, Japanese and Korean.