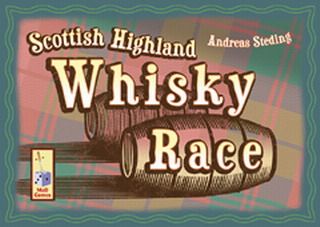 There is great discontent in Scotland. After the Battle of Culloden in 1746, the victorious Englishmen suppressed Scottish idiosyncrasies such as clan colors, kilts, bagpipes, tartan, and the Scottish language. Particularly loathsome was the tax placed on Scotch whisky, and the traditional race along the River Spey therefore became an ideal opportunity to smuggle such liquor in the participants' backpacks! In Scottish Highland Whisky Race, players aim to reach the finishing line, while selling whisky to the pubs along the way and all the time attempting to avoid the patrolling Englishman.