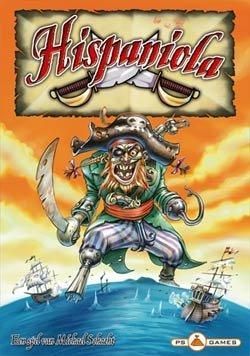 3 to 5 players lead groups of South Seas pirates, angling for the captain's positions on five ships that make up a small pirate fleet. Why? Well, that's obvious: the captains get the bulk of the booty. All cards (in different colours and numbered from one to fifteen) are shuffled and dealt out (fewer when playing with fewer players). After the trump colour has been determined, a traditional trick-taking game ensues. Whenever a player wins a trick, they get to place one of their sailors onto the captain position of the ship that matches the colour of the trick. If that post is already taken, then the other player must vacate the spot. That can sometimes end up with a sailor being tossed overboard - but they're not out of the game, they seek safety on an island. The more sailors this happens to, the better their chance of being hired again. At the end of the game, the captains and sailors on the ships are worth points - sailors stranded on islands worth minus points. Minus points are also awarded when a player wins many tricks during the game - which is why these won tricks can also be passed along.