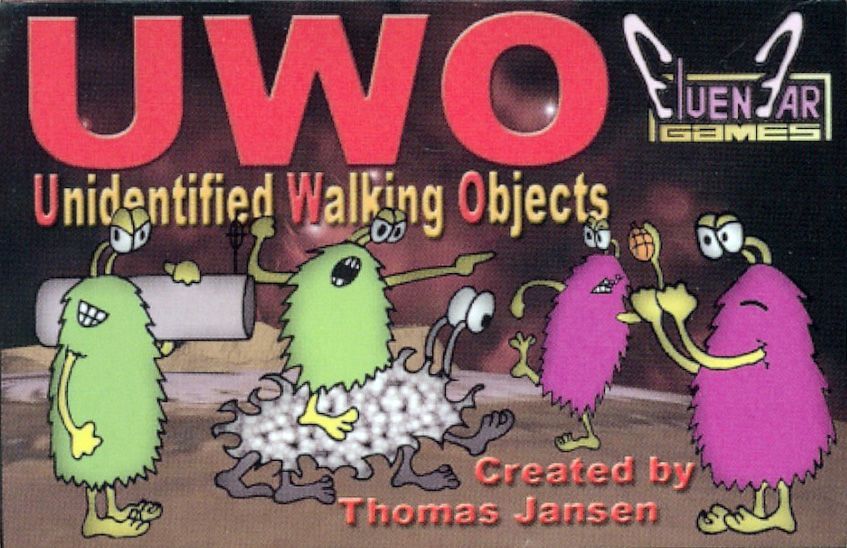 UWO's (unidentified walking objects) are residents of the planet Znorf. There are two kinds of UWO; The Gnorfs and the Pnorfs. Both of them are able to morf. But that is something that will be explained later on. The Gnorfs think that the Pnorfs are a group of ugly creatures and that feeling is completely mutual. All the more reason for them to start a war! beginning of the game UWO is a cardgame and a boardgame at the same time. Both players have six energy cards. The playing field is formed by the energy cards of both players. One player places them horizontally, directly in front of him. The other player does this at the side vertically, just like on the photo. The playing field is between these energy cards. Both players place their ten 'regular' UWO's of their own color in front of them in two rows of five each. The players shuffle their pack of cards and place them both upside down in front of them. energy Just like life on our planet, life on Znorf is expensive too. Everything you do will cost you "Energy". you have to pay it for morfing, walking or fighting. Strong UWO's use much energy. If both players used all of their six energy, then a round is over. Everyone gets back his energy. But beware! If you're out of energy and your opponent isn't yet, he will play several turns at once! And for your opponent, weak (and cheap) UWO's come in handy now. They can do a lot of damage to you! many different UWO's There are no less than eight different UWO's in the game. Some are riding Knorfs (strange animails). They can trample everyone. Others are cowards, hiding in bunkers, etc. UWO's carry many different weapons. Lasers, dynamite, granades, bazooka's, etc. The bazooka UWO for instance, is one of the coolest of the gang and he himself thinks so too. He is extremely powerful. He can even blow up tanks! Unfortunately, such a bazooka is a great danger to our tiny UWO. Each time he has shot someone, he will be knocked out until the end of your next turn! UWO's are specialists. Every UWO has protection against a specific other UWO. For instance, a UWO in a tank has protection against one who fights with his bare hands. dynamite UWO Well, let's just say there's only one of it on each side. One who can be quite important to both players... morfing UWO's can morf in exchange for one energy point: UWO cards may be placed on UWO's that are already in the game. This way, a regular UWO can be morfed into anything you want to, just like that! This can be very useful. Imagine a laser UWO threatening you. Your opponent announces that it's going to attack!! Don't panic, his UWO can never hit you when you are hiding in a bunker! So, when you have this card, just morf your furry alien into one and shoot back...and hope your opponent doesn't morf his UWO into a grenade UWO... the pack of cards At the end of each turn each player may refill his/her cards to 3. But beware, players can run out of cards. The game still goes on untill all UWO's of one player in the battlefield are destroyed. It is very easy for an opponent to adapt his army to yours, when you are not able to morf anymore! Imagine your opponent creating a small army of laser UWO's to attack your last bazooka UWO! They have protection against this weapon. You may panic now, cause your lost. In the pack of cards, there are also nine "miss cards." When you play this card, the shot will automatically be declared "missed" and of course you will have the chance to shoot back with this UWO. But don't play these cards to fast! Smart opponents remember how many you have left. When you lost them all, your opponent knows that every shot will be a hit. Sometimes it's smarter to just sacrifice a UWO, than to play a miss card.