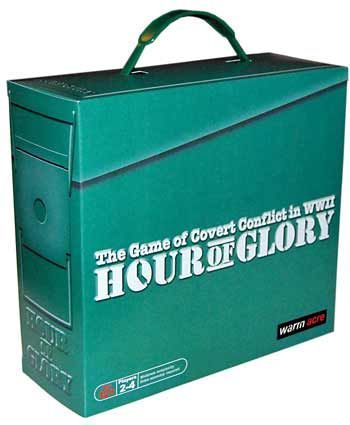 Hour of Glory is a game for 2 to 4 players. The boxed set contains everything you need to wage war in the shadows: including two rulebooks, a colorful multi-part playing area, play markers and movers (metal miniatures are optional but recommended) and a mission timer. Up to three players play individual Allied agents while the other takes on the role of Stronghold Commander, with a garrison of troops at his disposal. As an elite Allied agent you must infiltrate the enemy Stronghold, obtain vital intelligence on the Axis secret weapon and escape to report your findings to HQ. You have two distinct tactical options: raiding (stealthy movement and silent killing) and assault (speed, aggression and liberal use of firepower). Whichever way you decide to tackle your mission, you have just 60 minutes to accomplish it before the Stronghold is locked down – after which, escape will be impossible. Playing the Stronghold Commander offers a strategic as well as tactical challenge. You take control of the Axis war base, deploy your Sentries to create defensive zones and send out a senior Officer to investigate reports of intruder activity. When you have identified the threat and located the agents, raise the alarm and mobilise your Guards. Don’t let them leave your Stronghold alive!