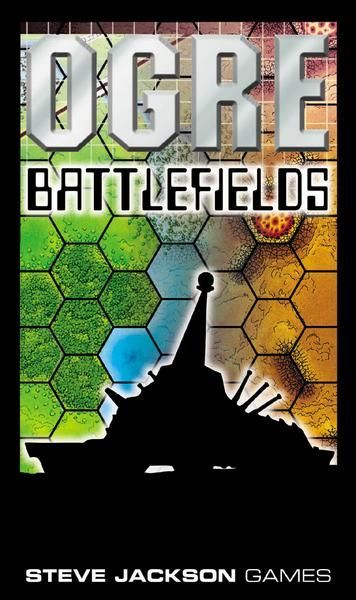 "Battlefields is a set of four new "geomorphic" maps designed to connect to the G.E.V. and Shockwave maps . . . making it possible to create maps over 2' by 3'! You also get rules and counters for: Engineers - Build bridges and other structures . . . or blow them up; Revetments - Prepare defensive positions to increase the survivability of your force; Militia - The ultimate cannon fodder. Also included are nine new scenarios and variants to let you fight the Last War across these new battlefields." Battlefields is an expansion for Ogre and Ogre Shockwave. It includes the rules and counters for two new types of infantry and hastily prepared defensive structures, as well as scenarios implementing them. The maps are new and can replace or enhance the maps from the base game. Expansion of the Ogre/GEV Family. Scenarios: Ceasefire Collapse (altered from G.E.V.) Breakthrough, Map G-2 (altered from G.E.V.) Breakthrough, Map S-2 (altered from G.E.V.) Raid, Map G-3 (altered from G.E.V.) Raid, Map S-3 (altered from G.E.V.) The Last Train Out, Map G-2 Same Song, Second Verse, Map G-3 Disputed Crossing, Map S-2 A Bridge Too Near, Map S-3 Expands: Ogre Shockwave