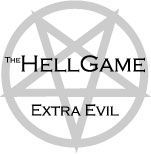 Extra Evil is an expansion for the The HellGame, containing 55 new cards, most of them Arcana cards. Among others, the deck contains: • Macinas. Some of the new cards in Extra Evil are machines that give permanent abilities to the Triumvirates very much like Daemonic “special skills.” These “macinas” need souls to work properly and can of course be stolen or blow up without the slightest warning. • Long passes. People who claim that the initial draw of Daemons gives the player who manages to draw the most powerful Daemons an unfair advantage have poured a lot of brimstone over the game. Experienced players know that it is the other way around. If you are stuck with a trio of heavies you are in deep trouble. Extra Evil will feature a lot of loooong passes to help those poor Triumvirates out. A Nonary Pass. Slide nine slots down the rank track and smile… • Another thing that can bog the game down has been the Permanent Hell Cards. Extra Evil will feature several new ways to remove the more irritating things caused by the Hell Cards, be it angry angels or happy New Age followers. • Extra Evil. The expansion will have just that. Extra Evil. Hellevators, make-up kits and the legendary Wine of Drunkenness. Extra Sin. Meet the Sodomess & her brother the Gomorran, and suffer the charms of Hell on Heels as well as the dangers of a Spiky Virgin. Extra Destructive. Nuclear devices, mechanical horses as well as Celtic instruments of torture. And least, but not last, Extra Evil allows you to turn people into toads. You have seen it done in the movies. Now it is your turn… Expands The HellGame