All Wound Up - Universal Statistics 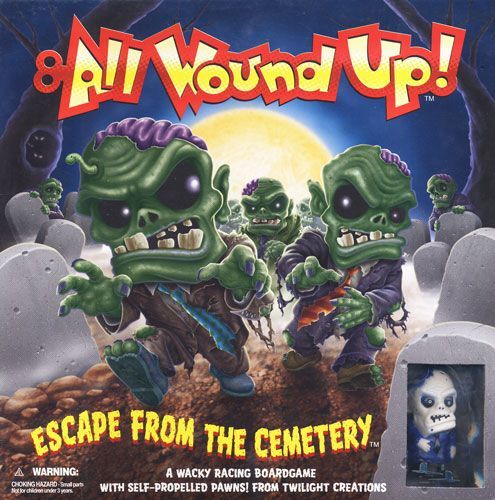 "It's boring when you're dead. So, you and your deceased friends have decided to have a little race around the graveyard...." Thus begins the wackiest game from Twilight Creations yet! The players control their pawns as usual. But: the pawns in this game are self-propelled windup toys! Players are dealt 8 cards and then draft them by passing first 4, then 3, then 2, and finally 1 to the player to their left. Other players then lead one of their sets and other players must play all their cards for the same action. Whichever player plays the most of that action takes it - if there's a tie, they both take it. The actions include Winding your pawn from 1-4 times, rotating left, rotating right or rotating your opponent. As players move on the board they encounter hazards, which might make them lose progress and brains. Each time they hit a brain they can take a brain token. Brain tokens allow them to take special actions when discarded. The game ends when one player manages to cross the finish line and exit the graveyard. There are 4 double-sided boards which allow many different races.