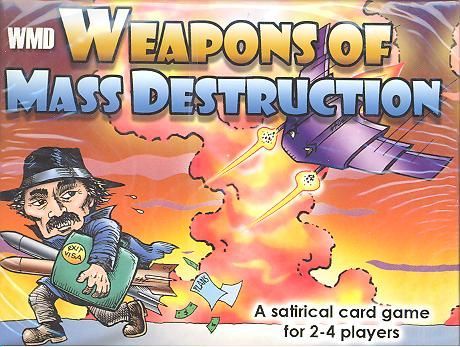 The newest expansion for the award-winning Nuclear War Card Game is called Weapons of Mass Destruction (WMD). WMD is a game for 2-4 players (more with combined sets). Each player represents a "major world power" and attempts to gain world domination through the strategic use of propaganda techniques or nuclear weapons. From the box, "Be the first on your block to blow up the world. The winner is the sole survivor, but sometimes there is no survivor and thus no winner! Takes less than an hour to play. If you buy the expansion sets, you can play with more players. This game is intended to be an expansion set for the original Nuclear War Card Game invented by aerospace engineer Douglas Malewicki, but WMD can be played by itself." Includes both the 70 card WMD deck as well as a new 40 card population deck featuring art with Nodwick, Kenzer and Company, and Dork Tower characters. Integrates with: Nuclear War Nuclear Escalation Nuclear Proliferation