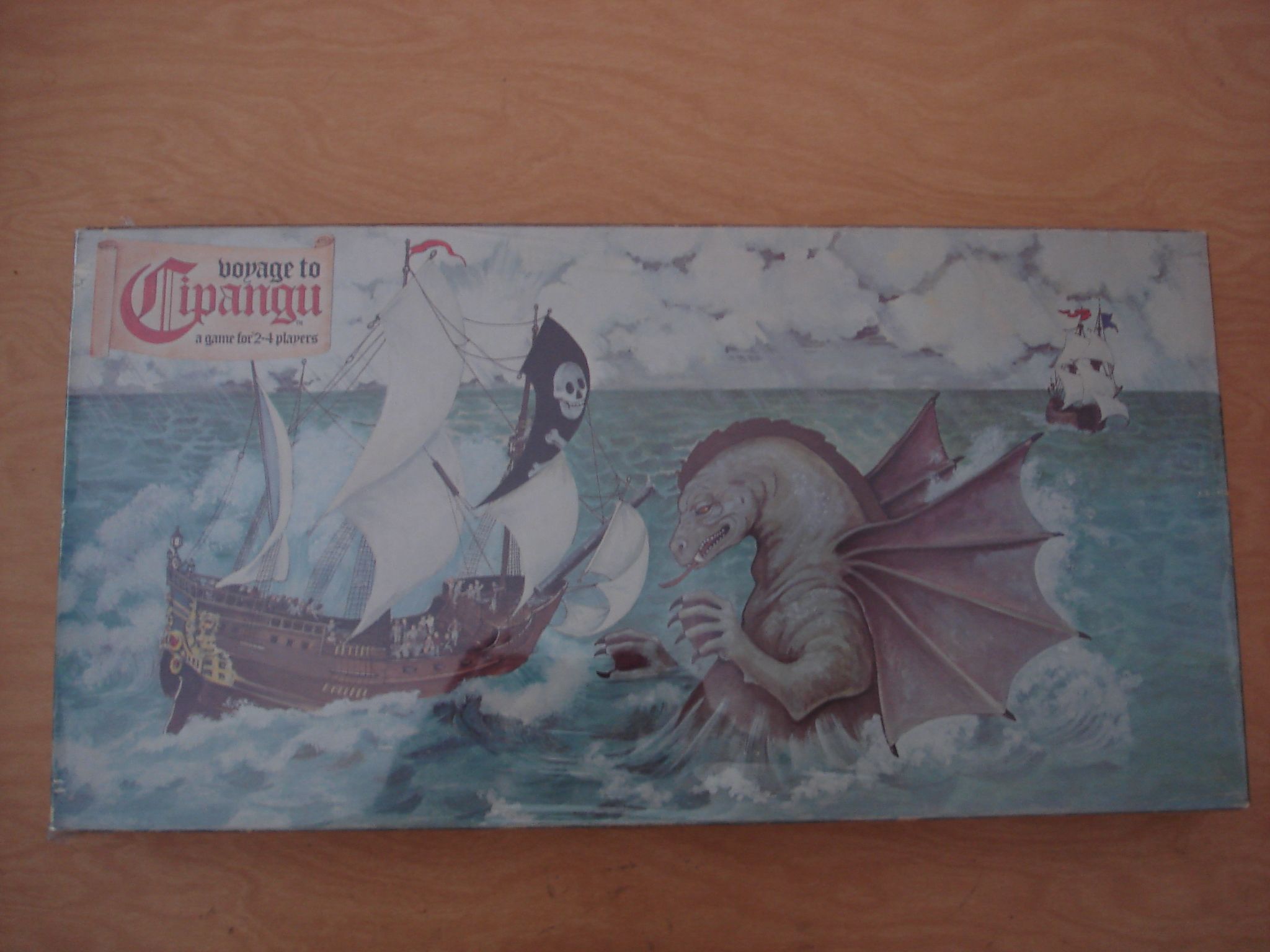 Cipangu (pronounced Chi-pon-gu) is the name given to the island of Japan by Marco Polo in his journals. As the introduction on the rules sheet quotes, Marco Polo described Cipangu as a land "...abounding in gold and producing vast quantities of the largest and finest pearls, together with a variety of precious stones, so that, in fact, it abounds in riches". Each player is sending their sailing ship out into the uncharted ocean in an attempt to find the riches of Cipangu, and other smaller islands, and return them to their home port. These riches are represented in the game by shiny gold counters which look very much like wide, flat gold bars. Only gold returned to one's port counts for victory. The sailing ship's hulls are printed on cardboard sheets, to be punched out and folded into shape. Three wooden dowel masts are inserted through punched-out, printed paper sails and then through the decks of the ships. The board is a blank diagonal grid of 32 square ocean spaces with the four players' home ports in the corners. The 29 Sea Square tiles are shuffled and 32 of them placed face down on the spaces. There are four each of Island, Reef, Ship and Monster tiles plus the Cipangu tile, a Fog tile, and a Storm tile. All others are open sea. There are four Encounter Decks, cards from which are drawn when a ship discovers Islands, Reefs, Ships, and Monsters. The monsters are the only fantasy element of the game. Their artwork is drawn in the style of the "Here There Be Monsters" of the old mapmakers. Each deck has cards with good or bad results: gold bars, extra sailors, repairs, attacks by monsters or pirates, grounding on reefs, being attacked or helped by island natives, etc. Each ship starts with three sailors and three masts. The markers for the sailors are actually the familiar plastic push-pins available in any dollar store, without the pin. Both sailors and masts serve as 'hit-point' indicators: any ship that loses all masts or all sailors is sunk. Movement range is determined by current no. of masts to a maximum of 3 spaces. There is a wind direction spinner which is a 'top' made up of an octagonal direction card with a wood dowel through the center. This is spun to determine which direction a player's ship cannot sail that turn. Players move around the board, turning over the sea tiles and trying to accumulate gold and survive the various events that can damage their ship. When the one Cipangu tile is discovered, players can get 3 gold bars each turn they stay there. Players can also 'Turn Pirate' by attacking another player's ship or port. 1d6's are rolled and compared, low roller in each round loses one sailor, ties cause both ships to lose a mast. Ships that lose all sailors are plundered of their gold and sunk. Ships that lose all masts just sink. Combat against ports is handled the same way except ports have no masts. Players can leave extra sailors in port as defense forces. Sunk ships are replaced, and damaged ships repaired, by paying one gold bar and continuing with a new/fixed 3-mast, 3-sailor ship from your port. Once the last Sea Tile is turned over, the game ends and Gold Bars are counted up to determine a victor.