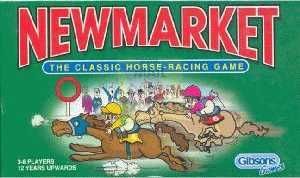 This is a repackaging of a traditional card game, known as Boodle, Stops or (in Britain) Newmarket. It's a noisy dash around a mile and three quarters in conditions you wouldn't describe as easy. Each player is dealt a hand of form cards which they use to try and influence the outcome of the race. The trick is that not all of the cards are dealt out and nobody knows which cards are missing. It's almost impossible to tell a good hand from a bad one in this totally unpredictable game and the race is never over until it's been won.