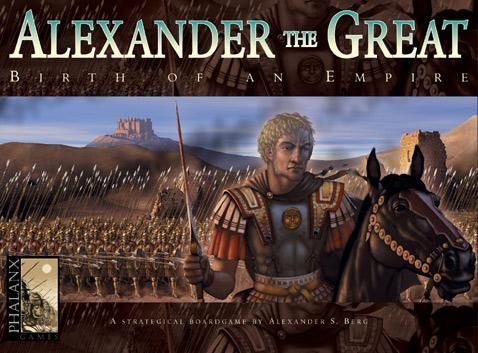 A description by Phalanx's Uli Blennemann from "Gone Cardboard" It is a completely new game, much lighter in complexity. The game uses a large gameboard, comes in our big box and is for 2-5 players. Playing time is 75+ minutes. It is not a simulation game but provides more Alex flavor than Alexandros. Each turn, players move with their armies (wooden) and build cities and temples (both wooden, too). In this game, players follow the path of Alexander's army, occupying provinces in regions, building temples, founding cities. You score points each round and also at the end of the game for majorities. There are 5 regions, but for the short game you just use #2 to #4. Players have 15 tiny wood cubes which they distribute each round on a hidden plan in 4 ways. Then they reveal their choices and carry out the actions. This way they decide 1. turn order 2. army size 3. temple building 4. city building. By putting more cubes than others in the sections controls how the round works for you. So the player with the most cubes in 1. gets to choose their turn order (since going later may be better). Then the cubes in 2. become your army on the board (and having majorities in provinces scores 2 pts). Moving the armies around costs cubes as well, which are taken from 3. and 4. Then, where your soldiers are, you can build temples (3.) or found cities (4.). But if another player is also doing the same, whoever has the most cubes on their plan gets it, but pays 1 more than the second highest. In this way, players spend their 15 cubes each round, moving from province to province in the region, trying to score points for controlling armies, building temples and cities. Where players directly compete, the costs are high. Where you are unopposed, your unspent cubes carry on to the next round, allowing you to try to get more points. When the last region is conquered, there is a final scoring, for the majorities of temples and cities in each region and then in the whole game. The scoring switches here, since in the rounds temples earn you 3pts & cities earn 5pts. But at game end, cities earn 10pts and temples earn 15pts. The game is a mix of planning, bluff, tactics and group think. It works as a contest of majorities and the use of the cubes, in both deciding who goes and what things cost, is clever.