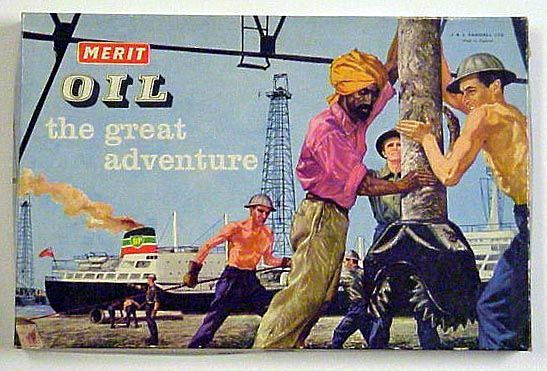 In "Öl für uns alle", players represent Oil Companies competing for oil-fields and oil-cargoes. Players move around the board in "monopoly manner" and can land on a variety of fields: "Information" (card drawing - a bit risk-cards type), "Memo" (card drawing - bonus-card-like), "Drilling" or "Helicopter" (allow to buy drilling rights), "Stock Market" (allows to buy stocks). Each time a player passes one of the 2 "production" fields, his oil fields produce certain quantities of oil (Kuwait producing most, Iraq second most, Qatar, Iran and Trinidad only little). When opting for drilling, the player token is moved from the board on a special drilling track which can either end with finding a well or with failure. At any time, a player can ship a cargo of his oil to the world's major ports (the ships move on the world map which is at the center of the board), the profit depends on the current price for oil (1-4, depending on what the "Information cards" bring). Players agree on a certain time limit and the richest player at that time wins the game.