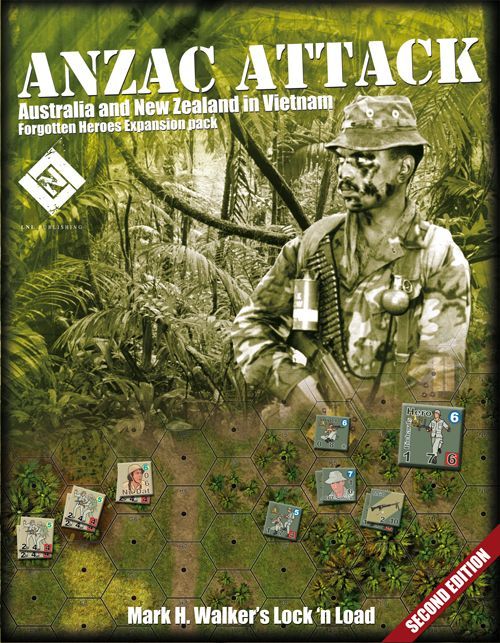 In the award-winning tactical boardgame, Forgotten Heroes Vietnam, you fought the North Vietnamese Army and the Vietcong with the United States Marine Corps and Army. Now it's time to step into the J again, this time with the military forces from Down Under in the first official expansion to Forgotten Heroes Vietnam. ANZAC Attack, adds Diggers and Kiwi units to the Allied side. You'll get a full range of units, including squads, half-squads, medics, leaders, and the heavy metal of Centurion tanks. It also provides the Lock 'N Load player with new NVA and VC units (including T-55 tanks), and new USMC units involved in the war of hearts and minds. Besides the eight ANZAC scenarios players can also try out two new USMC scenarios, and two focusing on the ARVN. You must own Forgotten Heroes Vietnam to play this game. This game is no longer available, you can find the new, improved and expanded edition in Lock 'n Load Tactical: Heroes of the Nam