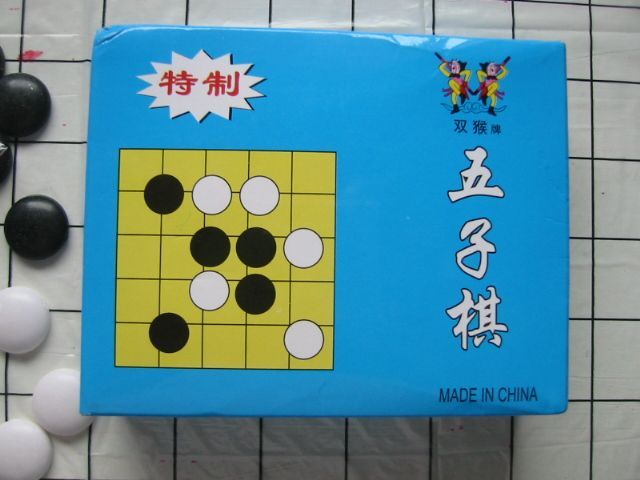 "Go-Moku" (Japanese - also spelled "Gomoku") or "wuziqi" (Chinese) is a very old game played with a Go set. (You can also play on a sheet of graph paper using X's and O's.) It is basically an expanded tic-tac-toe, but is vastly superior to that game. The name means "five points." It is debated whether this game originated in China or Japan, but evidence seems to lean to the former. The object is to get five stones in a row. A Go board is 19x19, so there is a lot of room to try to get this. (Some people play on a smaller 15x15 board.) The winning move is to get four in a row open at both ends: your opponent can only block one end on his turn, and you claim the other making five in a row. Therefore, a row of three stones open at both ends needs to be blocked so it won't turn into a double-open-ended four. So a winning move is to create a three-three or four-three or four-four: placing one stone so that it creates two winning moves at once; only one can be blocked. This is actually the children's version of the game as played in Asia. It's been proven that Black (who goes first) can always win if played "perfectly." Long before this proof, it was realized the game was heavily weighted towards Black. So they invented Renju as an adult version of Go-Moku.