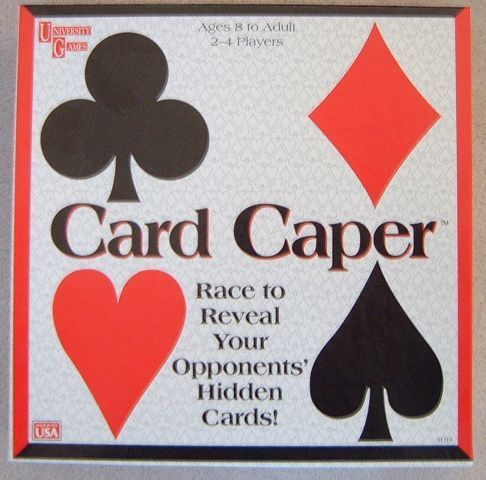 Each player is dealt a Hidden Card to begin. The object is to accumulate points by deducing the opponents' Hidden Card as quickly as possible. Next, each player is dealt an equal portion of the remaining deck, and must give information to the opponents; s/he must lay down a card of Higher Value, Lower Value, Different Value, and Different Suit. Players are given notepads in the style of Clue to make notes about what cards are played, and what can't be the Hidden Card of each player. Then, each player takes it in turn to roll the die, and either reveal more information, or guess at the identity of an opponents' card. Wrong guesses give no penalty, so you may as well try. If you're right, you get one point for each card remaining in that player's hand. This creates reverse suspense: players race to be first, because cards are dropped each round, and five points for last with a Hidden Card unguessed isn't enough to overcome someone who nailed two Hidden Cards early on. After everyone has revealed their card, whoever has the most points wins.