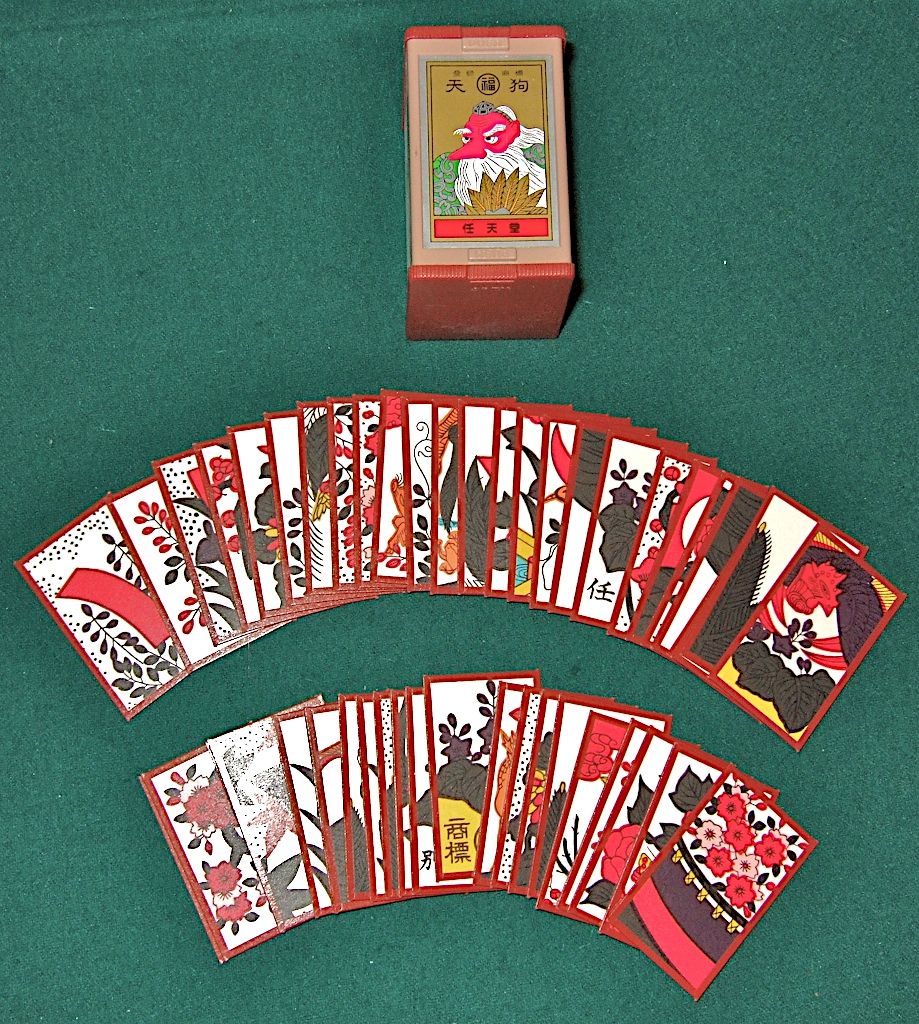 A traditional two-players Japanese card game played with the beautiful Hanafuda (literally 'Flower card') deck. Setup: the cards are all shuffled, and one card is randomly revealed: the player whom the birthday month is closer to the revealed card month is the first player and thus the dealer. The cards are shuffled again and handed out, two by two, to both players, as for the face-up talon in the middle of the table. Turn: Then each player proceeds as so: firstly, he discards a card face up on the table from his hand. If that card matches another card on the table (matching months), the player then wins both cards which he puts in his face-up collection, in front of him. The collection is always displayed in 4 columns, as so: Flowers, Ribbons, Animals and Specials. If it doesn't match anything, the discarded card stays on the table. Secondly, whether it matched or not, the player then draws the first card from the face down deck, and proceeds the same way: if it doesn't match any card, the drawn card stays on the table, but if it does match a card, the player wins both cards which he adds to his collection. Then the other player takes his turn. Turn's End: At the end of a player's turn, if he has any Yaku, he can stop the current month (inning) by stating his Yakus, then the points are scored and the next month begins. However, if he wishes to continue in order to increase his score for this month, he says "Koi-Koi" and the other player takes his turn. If later on during the game, the player who said Koi-Koi wins another Yaku OR increases his previous Yakus, he can then again stop the game or say Koi-Koi, as many times as he wants. But if a player gets a Yaku in a game where his opponent already said Koi-Koi, then he gets the right either to say Koi-Koi too, or to stop the game and receive his points, thus leading his opponent to get no points at all this month. End: Since each player has 8 cards in his hand, a month (inning) can at worse last 16 turns. In case of a game where one (or both) player(s) said Koi-Koi and no more Yakus have been added or increased before the month ends, then only the last player who said Koi-Koi scores his points as usual. The winner of a month becomes the dealer for the next month, or stays the same if there was not any winner. Each Yaku can add itself to the others. Here are the Yakus: Basic Yakus 10 Flowers / Kasu : 1 point (Each additional Flower adds 1 point) 5 Ribbons / Tanzaku : 1 point (Each additional Ribbon adds 1 point) 3 Purple Ribbons (blue) / Aotan : 5 points 3 Ribbons with Poems (red) / Akatan : 5 points 5 Animals / Tane : 1 Point (Each additional Animal adds 1 point) Doe + Boar + Butterflies / Ino Shika Chô : 5 Points 3 Specials without the Rain Man / Sankô : 5 Points 4 Specials with the Rain Man / Ameshikô : 6 points 4 Special without the Rain Man / Shikô : 8 Points 5 Specials : Gokô : 10 points Special Yakus The Moon + The Sake Cup / Tsukizake : 5 points (Bonus Yaku, only in addition to at least another normal Yaku) The Cherry Curtain + The Sake Cup / Hanamizake : 5 points (Bonus Yaku, only in addition to at least another normal Yaku) The Iris Flower is a "Joker" card: it can either be counted as an Animal, or as Flower to form a Kasu (but not both). The 4 Cards of the current Month / TsukiFuda : 5 points No Yakus / OyaKen : 1 point The game ends when one player reaches 50 points. In some variants, at the end of a month, the points scored by a player are subtracted from his opponent's score. In some variants, the player with the most points at the end of the year (December) wins the game.